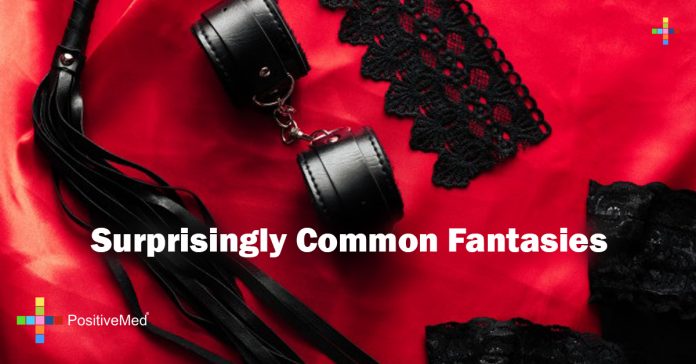 We all have fantasies in the bedroom. And with these fantasies comes insecurity. But you might be surprised by the results of a study recently published in The Journal of Sexual Medicine.

Domination is frequently reported as a desired experience. Over half of the men and women polled in the JSM article reported wanting a partner to dominate them in the bedroom. Dominating your partner was popular too. 46.7% of women wanted to dominate in the bedroom. 59.6% of men reported the same fantasy. Related fantasies, like being tied-up, scored high. Bondage was desired by 50% of participants. Being whipped or spanked didn’t score as high, but a third of participants wanted to try it.

This fantasy had mixed ratings. A sizable portion of both men and women would have sex with two men, 45.2% and 30.9% respectably. Having sex with two women was a definite fantasy of men, 84.5%, while the women’s percentage rose slightly. Sex with three partners or more was very popular with men, as long as all those partners were women, but woman came in at 24.7%. All male partners brought the women up to 28.3% and dropped men to 13.1%.

By far one of the most common fantasies, sex in unusual places scored high with both men and women. 81.7% of women and 82.3% of men wanted to have sex in an unusual place. Also scoring high was Location Being Important in My Fantasies with both sexes in the high 80s. Public places scored moderately high as well. Almost 20% of participants wanted to expose themselves in public, and a over 48% of men were fantasized about petting in public.

This fantasy was popular with both men and women, especially in regards to infidelity. 48.9% of women and 72.5% of men want to have sex with a stranger. 66.3% of women want to have sex with someone they know is not their spouse, as opposed to 83.4% of men. Participants didn’t express a clear desire to cheat on their spouses with a stranger, but the numbers suggest that a diverse array of partners and those partners being unfamiliar were a common fantasy.

The study concluded that people have many different fantasies and that statistically few are rare, unusual, or typical. The variance of people who wanted these fantasies to come true and those who didn’t was wide as well. So don’t stress over what turns you on in the bedroom.