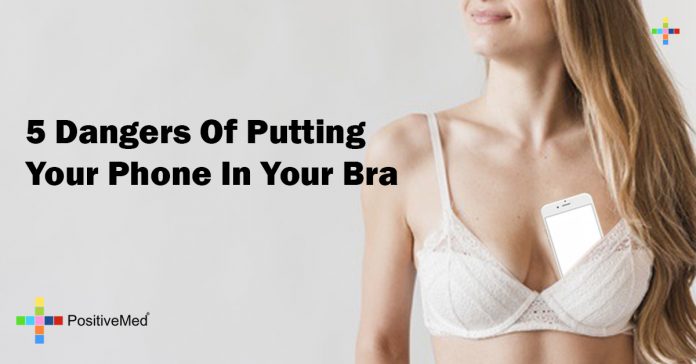 5 Dangers Of Putting Your Phone In Your Bra

If you’re like so many others, your cell phone is your constant companion. You have it with you at all times. When you’re on the go, you need a convenient place to put your phone and may think your bra will work just as well as a pocket. Think again and pay attention to five dangers of putting your phone in your bra.

Your Cell Phone Could Cause Breast Cancer

According to the American Cancer Society, you could be opening the door to breast cancer if you put your cell phone in your bra. While there is no definitive proof to date, there have been cases of breast cancer in young women who carried their phones in their brassieres. Think about it. Even if the phone isn’t being used, it always sends out electromagnetic signals, sending radiation into the fatty tissue of the breast. Do you really want them that close to your body?

Cell Phones May be Dangerous for Your Brain

Women who place their cell phones in their bras open themselves up to the risk of cancer in other parts of their body as well. The rate of brain cancer has gone up considerably with the rise of cell phones. It may not be a coincidence. Alzheimer’s Disease is another consideration. Exposure to electrical pulses and radiation could make a woman more prone to this dreaded disease.

Your Cell Phone Could Lead to Osteoporosis

Put your cell phone in your bra and you might wind up with weaker bones in that part of your body, such as the ribs or collar bone. One study focused on men who wore cell phones on their hips. Through an x-ray technique, it was determined that bone density was actually decreased where they carried their phones. The same could hold true for women.

Cell Phones are a Fire Hazard!

Over the summer, a teenage girl woke up to flames in her bed. She had placed her cell phone under her pillow before going to sleep. It is always possible that the same thing could happen to a cell phone in the bra. Why take that chance?

Cell Phones Could Pose a Risk to Fetuses and Fertility

According to the Marion Institute, research has found a possible connection between decreased fertility rates and a negative impact on developing fetuses. While the study was conducted with laboratory mice, prolonged exposure to a cell phone actually changed the neurological development of the developing mice. Women should take heed and avoid carrying cell phones close to their bodies.