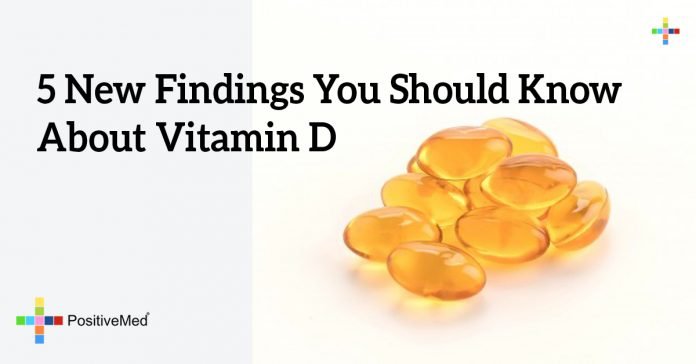 5 New Findings You Should Know About Vitamin D

Vitamin D has many health benefits and a diet including high levels of vitamin D can improve functioning in many different areas of life. Here are five new findings you might not know about vitamin D.

Vitamin D Can Help Reduce the Risk of Cancer

According to recent studies by the National Cancer Institute, vitamin D has the potential to reduce the risk of certain cancers. While the results are still in need of confirmation by other studies designed specifically to test the affect of vitamin D on cancers, many studies have suggested that a high blood or intake level of vitamin D is associated with a reduced risk for colorectal cancer. Early results have shown some promise in reducing the risks of breast, prostate, pancreatic, and colorectal cancers.

Vitamin D Levels Are Linked to ADHD in Children

Research presented at the American Academy of Pediatrics Experience National Conference; Exhibition suggests that low vitamin D levels are a strong contributing factor to the disorder ADHD (Attention Deficit Hyperactivity Disorder) in adolescents and school-age children. During a study of 1,331 students with diagnosed ADHD and 1,331 students without the disorder, researchers concluded that there was a notable gap in vitamin D levels between the two groups.

The American Society of Anesthesiologists recently printed a study which showed a strong link between higher levels of vitamin D in pregnant women and lower levels of pain during childbirth. Women who had high blood or intake levels of vitamin D often felt a lowered need for epidurals. This is likely because the uterus can lose some muscle function in women with vitamin D deficiencies, potentially causing more pain during labor and delivery. Researchers are considering revisiting requests for expecting mothers to take vitamin D supplements.

Low Levels of Vitamin D Are Linked to Myocardial Ischemia

As shown by a recent study, a vitamin D deficiency has been linked to myocardial ischemia, a condition where a blockage causes inadequate blood flow to the heart and can cause a weakening of the muscle, caused by mental stress. There was no such corresponding relationship between low levels of vitamin D and myocardial ischemia caused by physical stress.

A new study from Annals of Nutrition and Metabolism finds that a diet high in vitamin D has a strong correlation to increased short-term memory but not in declarative memory. Researchers are looking into ways that this information may be used in the treatment of memory-related disorders such as dementia later in life.