PositiveMed The Positive Side of Medicine
Home Most Popular Declare Your Freedom: Get Out Of Your Bra! 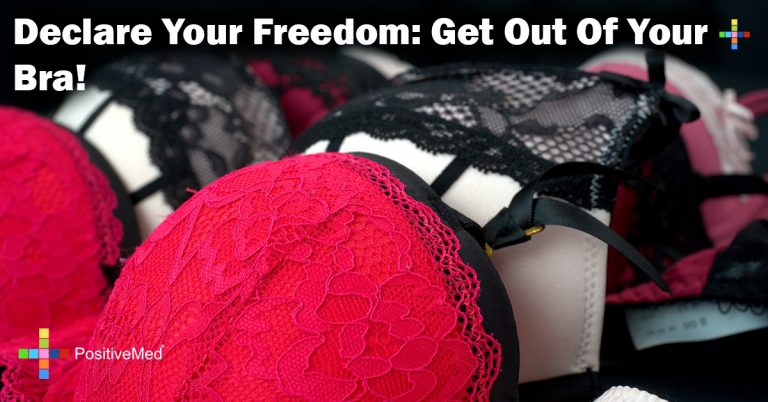 Declare Your Freedom: Get Out Of Your Bra!
Do We Really Need Bras?

Could wearing a bra be doing you more harm than good?
A controversial study says bras are unnecessary!

Trying 10 different styles in a hot fitting room to finally find one that fits properly, does this scenario sound familiar? Is putting yourself through all this trouble really worth it?

According to a French scientist, it’s not! He claims that bras, ‘are not needed,’ and might actually be doing women’s figures more harm than good.

His research concluded that a bra could prevent supportive tissue from growing and that breasts might be less likely to sag without one. He spent 15 years studying 130 women with different bust sizes, all were told not to wear a bra for different lengths of time, between a few months and several years. During this time he took regular bust measurements. They were also asked whether they suffered from back pain or felt restricted running daily tasks when not wearing a bra.

After many years of research he came to the conclusion that the bra is not needed medically, physiologically, or anatomically, the breasts do not benefit from being deprived of gravity, he strongly believes that not wearing a bra will keep the breasts in shape and prevent backache. In his words, “Contrary to popular belief, the breast does not fall, but tightens and lifts, and the quality of the skin improves.”

Keep in mind this was a study done on a small group of women and the long-term effects of not wearing a bra are unknown.

Another recent study has shown women who don’t wear a sports bra while exercising could be damaging their breasts. The ligaments which support the breasts are not elastic, and can be irreversibly stretched when breasts bounce during repetitive or high impact sports.

Bras are simply a personal preference and every woman should have the right to choose whether she wants to wear one or not!