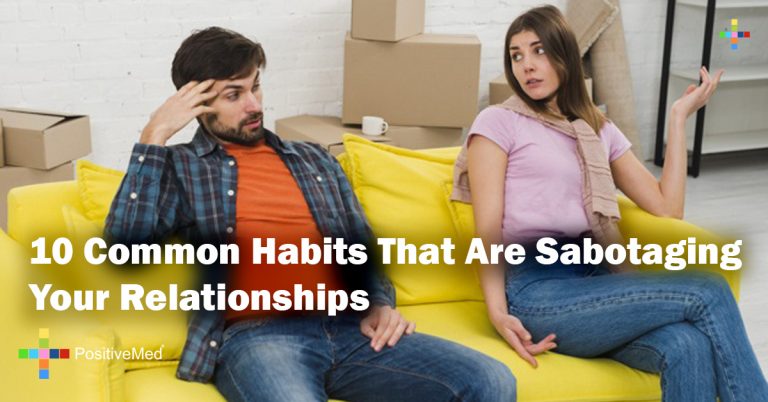 10 Common Habits That Are Sabotaging Your Relationships

If you’re fighting, at least try to fight in a more constructive way and solve the problem rather than exacerbating it. There are several behaviors some of us instinctively use that can be detrimental to our relationships and our own happiness.

Yes, sarcasm can be funny and no, you probably don’t mean anything by it, but if used too frequently it can place a barrier between yourself and the one you love. By definition, sarcasm is a “dry, bitter, sometimes scathing expression or remark.” Sarcasm can be used as a shield to protect yourself to avoid discussing things you find uncomfortable. However, it can be hurtful at times when it’s inappropriate. We’re not saying to never be sarcastic, just recognize there’s a time and a place. If you would rather not discuss things that make you uncomfortable, simply say that to your partner and they should understand.

This is probably the most common expression, especially when we’re angry or annoyed. The ideal situation is to break the habit and remake it into something more constructive. This action won’t help any situation, it’ll only make things worse, so try not to do it.

If you make a mistake, no matter how inane or great, own up to it – admit you were wrong and apologize. Take responsibility for your actions, accept the consequences, and work on solving the problem so it doesn’t happen again. Let go of your ego and become more assertive.

Kissing out of habit isn’t necessarily a bad thing, especially when you don’t have time to do it right, but being on autopilot can diminish the specialness of the action. Take some time to really kiss your partner, let them know you’re still into them and like kissing them.

This is also called “stonewalling” which is when you deliberately put a barrier between yourself and your partner during an argument, you’re likely to become sullen and silent, refusing to discuss your feelings or participate in constructive dialogue. Relax, take a deep breath. Avoiding conversation, even if you’re against the topic, will not solve your problems. Talk it out. Realize this is a bad habit and try not to clam-up during a fight but rather speak rationally.

Hiding your feelings means you don’t trust your partner to handle it, and trust is the most important thing of all. If you don’t want to discuss something, don’t just say “no” – it’s better to say, “I don’t want to talk about this right now. Let me think about it and we can try again in an hour,” then actually do it.

This is very similar to #5, though while they refuse to talk during an argument, this type of person just leaves – typically while their partner is still talking because they don’t like what they hear. This is not a great way to deal with an issue that has appeared in a relationship and will just make things worse. You owe it to yourself and your partner to at least stay and listen to what they have to say; they may have a point, or even be right. Behave like a mature and responsible person and attempt to communicate efficiently.

Bickering involves arguing about small, trivial matters or things that are insignificant. Does it really matter who said what or how? It’s way more important to figure out where you are and where you are going. Focus on solving problems and don’t blame the other person for everything that’s wrong in the relationship. Be forgiving, both of your partner and of yourself.

Do you love me now? Possessiveness, jealousy, and anxiety are the companions of people who suffer from insecurity in their relationships. They anticipate loss and it interferes with their ability to truly experience all the positive aspects of the relationships they are in. Your partner is with you for a reason, constantly questioning that will eventually lead to a self-fulfilling prophecy.

How often do you simply go with the flow, even when it’s something you don’t want to do? When you’re doing that, do you sometimes become resentful of your partner and become very negative? There’s nothing wrong with being agreeable, but not taking a stance on anything says to your partner “I don’t care,” which can be interpreted as “I don’t care about you,” or “No matter what, I’m not going to be happy.” Make a decision, encourage diplomacy. You’re in this together, act like it.

10 – Taking Them For Granted

You’re in this relationship for a reason, remember why you love the person you do and show them you do. Pay attention to them and their needs, appreciate them for the little (and big) things they do. Not just anyone is your special sweetheart, they are.

Most people don’t realize they’re actually sabotaging themselves and their relationships, destroying the closeness and fun they used to have within the relationship. Remember that while you aren’t perfect, neither is your partner, but together you can be greater than anything you may have been while apart.