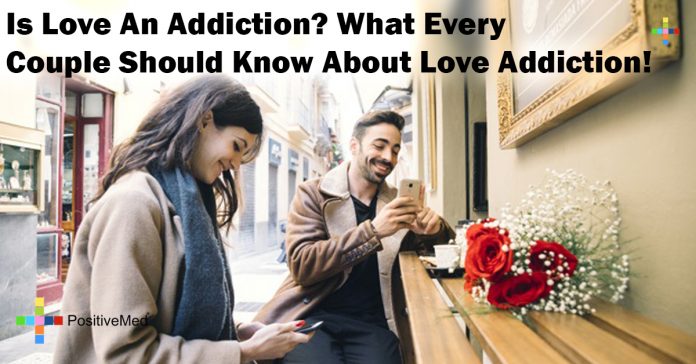 Is Love An Addiction? Can We Love Too Much?

“Love is like a drug and we don’t care about the long term side effects; we just care about how high we can get” —Unknown

The identification of love and addiction can be found in literature, philosophy, psychology, psychiatry, and brain studies and it remains common today. “Love addiction” and “Sex addiction” are, however, disputed terms. They are not mentioned in the Diagnostic and Statistical Manual of Mental Disorders (DSM), published by the American Psychiatric Association; in fact, DSM-5, published in 2013, refers to these phenomena as “hypersexuality.” And the World Health Organization’s recent version of its International Classification of Diseases, ICD-10, refers to these phenomena as “excessive sexual drive.”
These disputes are not arbitrary; they express the complexity of the issue. I believe that profound romantic love is not an addiction, although some features of addiction, such as preoccupation, are indeed to be found in profound love. However, lust, or intense sexual desire, can become addictive. Moreover, not all types of preoccupations are harmful; when the preoccupation is constitutive of flourishing life, it is beneficial and cannot be regarded as addiction.

Is the wish to be with the beloved an addictive obsession?

“Too much of a good thing is wonderful”? Mae West

An obsession, which is considered the primary symptom of any addiction, is defined as “a persistent disturbing preoccupation with an often unreasonable idea or feeling” (Merriam-Webster). The terms “disturbing” and “unreasonable” are crucial here. Persistent preoccupation with an idea or a person is not harmful in itself as long as it does not harm the agent’s flourishing. To clarify this, we need to discuss the notions of “repetition” and “loving too much.”

Repetition is an action or event that reoccurs regularly or intermittently. In human behavior, repetition is often treated in a negative manner, especially when no added value is gained in saying or doing the same thing again and again. Indeed, repetition generates boredom and de-activates human capacity. Why should we waste mental resources on something repetitive? Accordingly, emotions are generated by the perception of a significant change in our situation, rather than by repetition of the same event.

Can we speak about valuable repetition, that is, repetitive activities that have an added value to the initial activity? Many human capacities, such as playing the piano, dancing, and swimming, are maintained, and even enhanced, only by repeatedly utilizing them. In these cases, the repeated activity is valuable as without it, the capacity will deteriorate or fail to develop—hence the saying “Use it or lose it.” A repeated activity can be harmful when it is used excessively or it damages other major flourishing activities. Since profound love involves a positive preoccupation that enhances one’s personal flourishing, it cannot be regarded as an obsession, which is by its very definition a negative experience.

When a repeated activity does not contribute to the agent’s development and flourishing, it is likely to become addictive. One such example is sex. Thus, unlike profound love, which develops with time and enhances the agent’s flourishing, sexual activities are often repetitive and almost identical at all points of time; hence, excessive sex is more likely to become addictive. The same goes to excessively watching television, gossiping, or playing computer games.

Can we love too much?

• “I love you much too much, I’ve known it from the start, but yet my love is such, I can’t control my heart” Dean Martin

• ”I love my house too much to leave my husband.” A married woman explaining why she does not get divorced

Love is morally desirable as it entails profound care for another person. It is hard to see how such positive care can be criticized. Nevertheless, people do criticize lovers and especially those whose love appears to be excessive. Can one tell one’s beloved that he loves her too much? The question of whether love is an addiction also depends on whether love can be excessive—that is, whether we can love too much, and whether such love is harmful.

A useful distinction in this regard is that between romantic intensity, which expresses the momentary value of acute emotions, and in particular the intensity of the sexual aspect, and romantic profundity, which embodies frequent acute occurrences of intense love over long periods of time, along with life and romantic experiences that promote the individual’s flourishing. As profound love is an engine of human flourishing, its benefits run deep. Just as we would not fault an author for writing a book that is too profound, we cannot criticize a lover for loving too profoundly. Like other flourishing experiences, profound love is also valuable since it resonates with the lover’s character and unique circumstances. Hence, the issue of harmful addiction does not arise at all.

Superficial activities, such as casual sex and watching television, might be enjoyable even though they do not contribute much to our long-term flourishing. However, when they are excessive they can be harmful as people can become addicted to them while neglecting other flourishing activities. Romantic intensity, but not romantic profundity, can be excessive. Thus, the lover’s intense passion might prevent her from noticing, or at least admitting, that his attitude toward her is humiliating or that their relationship has very little chance of surviving in the long term. However, since profound love is constitutive of personal flourishing, we cannot speak about an excess of flourishing. Translating one’s profound love into concrete deeds can be detrimental if one does not recognize what is good for the beloved (Ben-Ze’ev & Goussinsky, 2008, ch. 8).

A clear line exists between profound romantic behavior, which is part and parcel of our flourishing, and the highly criticized phenomenon of so-called “love addiction” and “sex addiction.” This line is based first and foremost on the difference between profound and superficial activities. Indeed, Peele and Brodsky, in their classic book Love and Addiction (1988), argue that the distinguishing feature of the addictive attitude “is not the intensity of passion, but its shallowness.”

Being profoundly in love involves pursuing many different flourishing activities with the beloved; being a sex addict confines your world to very narrow and repetitive activities. The repetitive and superficial attitude involved in the sexual interaction of a sex addict greatly impedes personal development and flourishing. Being in love can help lovers to flourish in the long run. In profound love, the wish to be with the lover is quite different from the obsessive need that is the driving force in addiction.

To return to the question of whether it is possible to love too much, we can conclude that something good can be criticized as being excessive when such excessiveness does not contribute to the agent’s flourishing and might even impede it, mainly by preventing the agent from pursuing other less enjoyable, but more meaningful and beneficial activities that would promote his or her flourishing. Accordingly, in many circumstances, “Up to a point, the more the merrier, after which “one can have too much of a good thing.” Sex is typically a wonderful experience, but sex addiction is negative and needs to be treated. Imelda Marcos, the former first lady of the Philippines, had a collection of 3,000 shoes. The country singer Dolly Parton revealed that she never wore the same clothes twice; so she probably had a lot of clothes. A documentary on Fidel Castro puts the number of his sexual partners at 35,000—two a day (one at lunch, one at dinner) for the entirety of his four-decade rule.

The above cases are indeed examples of having too much of a good thing, particularly when those good things are superficial experiences and commodities and when preoccupation with them impedes the agent’s flourishing by leaving very little time and effort for more profound activities. Similarly, couples can be said to spend too much time with each other in cases where this prevents each partner from engaging in other meaningful, intrinsic activities.

When people speak about loving too much, they often refer to the intensity that overwhelms the lover and makes him blind to the more profound aspects of loving relationships, such each partner’s need for autonomy and personal flourishing. Thus, Bottom of Formwwwwhen intense love blinds us and makes us act immoderately, such intense love can be said to be too much. A remark such as “I couldn’t help it; I was madly in love with her” is indicative of excessive love, which lacks the restraints and controls that enable autonomy and personal growth to develop and in extreme cases can lead to possessiveness and domination. Similarly, the lover’s intense love might overwhelm or beguile her, preventing her from realizing that her partner’s attitude toward her is humiliating or that their relationship has very little chance of surviving in the long term. Hence, it is possible to criticize intense love on the grounds that such intensity prevents the lover from seeing the partner’s faults. For this reason, Cupid, the Roman god of love, is depicted as a blindfolded boy, indicating that lovers are blind to the faults or the unsuitability of the one they love (Ben-Ze’ev, 2000: 420–421).

Profound romantic love is not in its nature excessive or wrong, as it remains sensitive to the beloved’s needs and flourishing. It is romantic intensity rather than romantic profundity that is prone to be excessive and harmful to the flourishing of both the lover and the beloved.

“For a while, I had this uncontrollable urge – this addiction to danger. Now I look back and I think, ‘Gee, what an idiot. I was risking my life just for the sensation of it.” Steven Seagal
“I can’t stop loving you.” Ray Charles

A clear line exists between profound romantic behavior, which is part and parcel of our flourishing, and the highly-criticized phenomena of “love addiction” and “sex addiction,” which are related to superficial romantic intensity. Being profoundly in love involves pursuing many different flourishing activities with one’s beloved. Being a sex addict confines your world to very narrow, repetitive activities. The repetitive and superficial attitude involved in the sexual interaction of a sex addict greatly impedes his or her personal development and flourishing. Being in love can help lovers flourish in the long run. Sex addiction disrupts other activities and has a long-term destructive impact. In profound love, the wish to be with one’s lover is quite different from the obsessive need that is the driving force of addiction. Accordingly, profound love cannot be addictive and cannot involve loving too much.

Aaron Ben-Ze’ev, Professor of Philosophy is at the University of Haifa. He received his B.A. in Philosophy and Economics (1975) and his M.A. in Philosophy (1977), both from the University of Haifa, his Ph.D. is from the University of Chicago (1981). His research focuses on theoretical issues concerning the emotions, as well as the study of particular emotions. His major books are The Perceptual System (Peter Lang, 1993); The Subtlety of Emotions (MIT, 2000), Love Online: Emotions on the Internet (Cambridge UP, 2004), In The Name of Love: Romantic ideology and its victims (with Ruhama Goussinsky, Oxford UP, 2008); Die Logik der Gefühle: Kritik der emotionalen Intelligenz (Suhrkamp, 2009). He is currently completing a book on Romantic Compromises. At the University of Haifa, Professor Ben-Ze’ev held several academic positions including President, Rector, Dean of Research, Chairperson of the Philosophy Department, Head of the University of Haifa Press, and Head of the Academic Channel. Professor Ben-Ze’ev is considered one of the world’s leading experts in the study of emotions. He is the President of the newly established European Philosophical Society for the Study of Emotions.
Email
Website
Blog on love