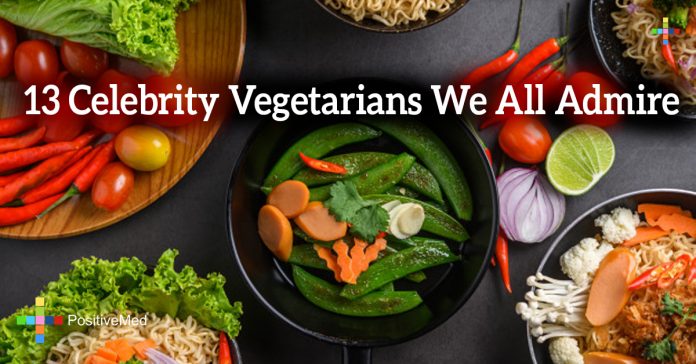 13 Celebrity Vegetarians We All Admire:

Here are a few vegetarians you may already appreciate:

The famous scientist Albert Einstein turned to vegetarianism and believed it to be better. In his last year of life, he decided on a vegetarian diet and felt well without eating fats, meat, and fish.

The former US president believes exclusively in a vegetarian diet. He told an interviewer he does not eat eggs, meat, or dairy products and consumes very little oil. Lately he has turned almost vegan and decided to enjoy a plant-based diet to keep his heart healthy and extra weight off. Since changing his diet he has lost 20 pounds.

Dalai Lama, who is vegan, says that animals deserve compassion and we should know their pain. He decided to go vegan and respect all forms of life. When asked about his views on eating meat, he stated a vegetarian diet is the healthiest choice.

Mahatma Gandhi believed the food we eat helps shape our consciousness and is not just meant to satiate our appetite. He was a strict vegetarian and kept away from cow’s milk. He enjoyed goat’s milk which is more nutritious than cow’s milk with higher vitamins and mineral content. He promoted fruit as a great way to keep weight low.

George Bernard Shaw was a vegetarian and one of the great thinkers and dramatists of his time. He was a great writer and composed wonderful dramatic literature.  He is a great answer for the critics that say vegetarians cannot compete with great brain workers. He staunchly supports a vegetarian diet to fight the unhealthy conditions and face all weather conditions.

James Cameron turned vegan in 2013 and states, “by changing what you eat, you will change the entire contract between the human species and the natural world.”After he decided to go vegan, he noticed great and positive changes in his life. He felt like as if he woke from a long sleepwalk.

Leonardo Da Vinci was vegan and even abstained from honey. He was well-known as a fruitarian and was against the idea of killing animals.

Paul McCartney is a vegetarian and promotes vegetarian dishes. He launched a Meat-Free Monday campaign to encourage people to modify their diets and bring meaningful changes by giving up meat just one day a week. He focuses on the benefits derived from a vegetarian diet.

Rosa Parks, who was a civil rights leader, promoted vegetarianism. She was well-known for promoting peace and justice. She attributed her success, health, and stamina to her strictly vegetarian diet.

Actress Natalie Portman is a vegan and has always followed a vegetarian diet. She believes that Paris is getting better for vegans. She opposes the torture of animals and followed the diet during her pregnancy.