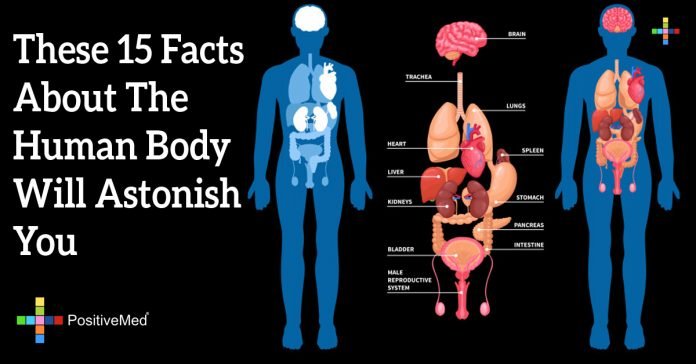 These 15 Facts About The Human Body Will Astonish You

1. The brain is much more active at night than during the day.
Our bodies may be passive and resting during sleep, but your brain is actually quite active. Outside of just giving us good or bad dreams, the brain cements memories and skills during sleep.

2. 80% of the brain is water.
Unlike the firm, gray mass portrayed on television, the brain is actually mainly water. Brain cells require twice as much energy as other cells and water provides that energy. When you’re properly hydrated, your brain can work at full capacity. You will think better and faster and be more creative.

3. The human heart can squirt blood 30 feet.
The pressure to do this is required to move blood through your body quickly and efficiently.

5. The average person expels flatulence 14 times each day.
Digestion causes gas, and gas must be released, a lot.

6.The largest cell is the female egg and the smallest is the male sperm.
The typical ovum can be seen with the naked eye, but a sperm is little more than a nucleus.

7. Babies are always born with blue eyes.
The melanin in a baby’s eyes needs time to develop and their eye color will develop gradually in the first few months of life.

8. Most men have erections every hour to hour and a half during sleep.
The brain is extra active and lying down allows for easier blood flow, making erections during sleep very common.

9. About one third of the human race has 20-20 vision.
There are people with “perfect” vision, though the percentage decreases as people age.

10. We are about 1 cm taller in the morning than in the evening.
The stresses of the day compresses your spine enough to actually be measured. So sit up straight!

11. About 32 million bacteria call every inch of your skin home.
It’s gross to think about, but actually, many of these bacteria are necessary to keep up healthy.

12. Humans shed about 600,000 particles of skin every hour.
Even though you rarely realize it, your skin is constantly renewing itself.

13. Every tongue print is unique.
Each tongue is different and has its own print. So, don’t lick anything if you commit a crime.

14. The colder the room you sleep in, the better the chances are that you’ll have a bad dream.
It’s not clear why, but if you’re prone to nightmares, you may consider a warmer sleeping environment.

15. Right-handed people live, on average, nine years longer than left-handed people do.
This has less to do with genetics than to do with environment. Most tools and machines are made for righties. Lefties suffer thousands of injuries and deaths every year caused by using right handed implements.