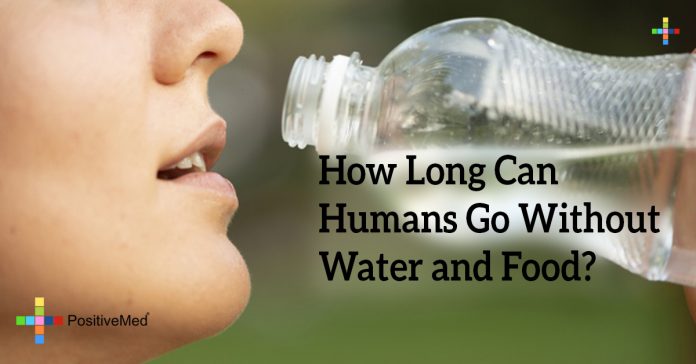 How Long Can Humans Go Without Water and Food?

Its a question that has plagued minds for hundreds of years, as water and food are the most vital ingredients for survival after air. To correctly estimate how long someone can go without these survival agents is difficult. The time frame for this purpose is discussed in different ranges such as hours to days, days to weeks, or weeks to months, as many factors are involved in this and every individual responds differently to different circumstances. Some people have reported living without food and water for years surviving just on the nutrition obtained from sunlight.

How long a human can survive without food and water depends on many factors, the most important of them being the will of the person. One needs to be determined in order to survive without water and food. It might not be a good idea to be without water for long as one can suffer from dehydration, however one can survive quite a long time without food as long as they are well-hydrated. Doctors suggest the human body can survive for six weeks without food as long as the body is sufficiently hydrated. Overall physical condition like a person’s weight, health, and weather play an important role in the scenario as well.

This is why some people manage to survive even longer than six weeks without food whereas others starve to death in less time. Your survival without food and water depends on physical condition and to some extent extra body fat. The first thing the body tends to use when it does not get food is carbohydrates, next is fat, for that reason a person with extra fat is more likely to survive longer without food. The next important factor is metabolism, its the process which converts food into energy. One will burn the food intake slower if the metabolism rate is slower so the person can go longer without replacing the food energy. Climate, too, is a major factor which will affect the duration of survival without food. If you have no food, both cold and hot weather can be fatal.

Surviving without water can be a different story. Dehydration can set in within an hour if one does not get water. Someone who is overly exerted in the heat can die within several hours if not provided sufficient fluids. Water is required for humans for plain and simple living. We need to replace the water we lose through sweat, urine, and feces so our organs continue to work properly. Heat stroke is a major risk your body faces when you do not consume water for a long period of time, drinking water also helps lower your core temperature.

We have a history filled with many examples wherein we have seen people who have survived without food and water for many days. One of the most prominent freedom fighters of Indian history Mahatma Gandhi once survived for 21 days with only occasional sips of water during the Civil Disobedience movement in 1940. He was in his 70’s at that time and very thin, but he survived that hunger strike with ease. Another famous example is the Irish strikes of 1981 where as many as ten men survived without food for periods ranging from 46 to 73 days.