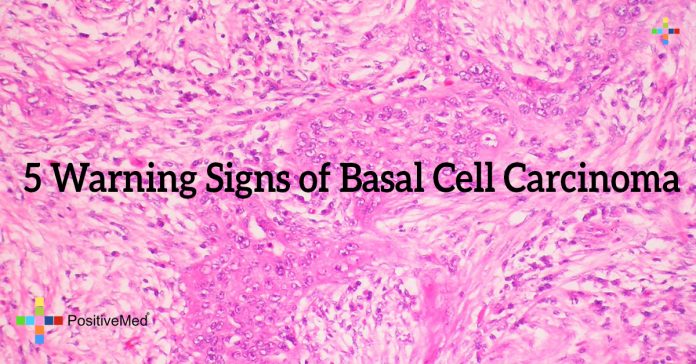 Basal Cell Carcinomas (BCCs) are abnormal, uncontrolled growths or lesions that arise in the skin’s basal cells, which line the deepest layer of the epidermis (the outermost layer of the skin). BCCs often look like open sores, red patches, pink growths, shiny bumps, or scars. Usually caused by a combination of cumulative UV exposure and intense, occasional UV exposure, BCC can be highly disfiguring if allowed to grow, but almost never spreads (metastasizes) beyond the original tumor site. Only in exceedingly rare cases can BCC spread to other parts of the body and become life-threatening. Avoiding the sun and using sunscreen may help protect against basal cell carcinoma.

There are an estimated 2.8 million cases of BCC diagnosed in the US each year. In fact, it is the most frequently occurring form of all cancers. More than one out of every three new cancers are skin cancers, and the vast majority are BCCs. It shouldn’t be taken lightly: this skin cancer can be disfiguring if not treated promptly. Are you at risk? We have the information you need about the prevention, detection, and treatment of basal cell carcinoma.

Frequently, two or more of these features are present in one tumor. In addition, BCC sometimes resembles noncancerous skin conditions such as psoriasis or eczema. Only a trained physician, such as a specialist in diseases of the skin, can decide for sure. If you observe any of the warning signs or some other worrisome change in your skin, consult a physician immediately.

1. An open sore that bleeds, oozes, or crusts and remains open for a few weeks, only to heal up and then bleed again. A persistent, non­–healing sore is a common sign of an early BCC.

2. A reddish patch or irritated area, frequently occurring on the face, chest, shoulders, arms, or legs. Sometimes the patch crusts, and it may also itch. At other times, it persists with no noticeable discomfort.

3. A shiny bump or nodule that is pearly or translucent and is often pink, red, or white. The bump can also be tan, black, or brown, especially in dark-haired people, and can be confused with a mole.

4. A pink growth with a slightly elevated rolled border and a crusted indentation in the center. As the growth slowly enlarges, tiny blood vessels may develop on the surface.

5. A scar-like area that is white, yellow or waxy, and often has poorly defined borders; the skin itself appears shiny and taut. This warning sign may indicate the presence of an invasive BCC that is larger than it appears to be on the surface.

Disclaimer: This article is for informative purposes only, and should not be used as a replacement for expert medical advice.