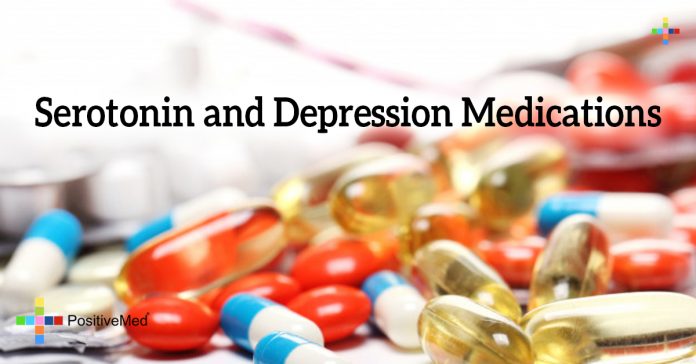 Depression Medications – Serotonin plays a fundamental role as a neurotransmitter substance in behaviors such as aggression, core temperature, mood, sleep, physical desire, and appetite. High and low levels of this neurotransmitter will impact positively or negatively human patterns in these areas. Also, the available serotonin in the brain regulates melatonin, another hormone involved in sleep regulation. Serotonin interacts with other neurotransmitters involved in human behavior like dopamine and noradrenaline.

Mood is the one of the most interesting human characteristics, and how our mind regulates it. The good function of serotonin is linked to well-being, humor, and absence of depression. If we are depressed due to dysfunction the obvious answer is to consume more serotonin to fix it. However, the ingestion of oral serotonin, and its precursor tryptophan, cannot pass the brain barrier, its synthetized and digested before it reaches the serotonin pathways.

• Selective Serotonin reuptake inhibitor (SSRI)
In use since 1987, when Prozac, generic name fluoxetine, came to market. These antidepressants modify serotonin metabolism and increase serotonin action due to inhibition of the reuptake of the neurotransmitter after being released into synaptic space. Serotonin neurons are located all over the body, which is how serotonin acts in every dimension of behavior. Paroxetine, sertraline, and clomipramine are examples of these medications. In addition to depression these medications are helpful in obsessive compulsive disorder, premature ejaculation, and eating disorders.

• Serotonin Noradrenaline Reuptake Inhibitor
Act upon the serotoninergic and noradrenaline receptors in the brain. Brand names such as Effexor, generic name venlafaxine, act the same as SSRI’s, meaning they make more serotonin and noradrenaline available in the neurons. They are commonly used for the treatment of depression, social phobia, obsessive compulsive disorder, and anxiety disorders. Some of the common side effects include $e*[email protected] dysfunction, dizziness, nausea, dry mouth, somnolence, and suicidal thoughts.

• Tricyclic antidepressants (TCA)
Block the reuptake of serotonin and noradrenaline, so that serotonin levels are increased. They were discovered in the 1950’s and are no longer used because of numerous side effects. Imipramine is the most famous example of this kind of antidepressant.

• Noradrenergic and serotoninergic specific antidepressants.
By blocking some specific receptors they enhance the adrenergic and serotoninergic neurotransmissions in the brain, specifically neurotransmission involved with serotonin. Since they block specific receptors of serotonin in the brain, this kind of antidepressant may have fewer side effects. Brand names of this type are Bolvidon, Norval, Remerol, and Tecipul.

• Monoamine Oxidase Inhibitors (MAOI’s)
The first antidepressants on the market, they block the enzyme monoamine oxidase. They are not used anymore because of terrible side effects. Due to their general effect and possible interactions with other medicines, they can be the most dangerous type of antidepressant.

Remember that these medicines need to be prescribed by a health care professional do not attempt to buy them through the internet without prescription. If you are already taking an antidepressant don’t take other illegal drugs or medications that might interact with them. If you notice side effects, ask for your doctor for an extended list of them. Withdrawal and side effects are going to be present in most cases. For some depression natural treatments visit: Depression Natural Treatments.