PositiveMed The Positive Side of Medicine
Home Inspiration Awesome in Web Humans evolved after a female chimpanzee mated with a pig! 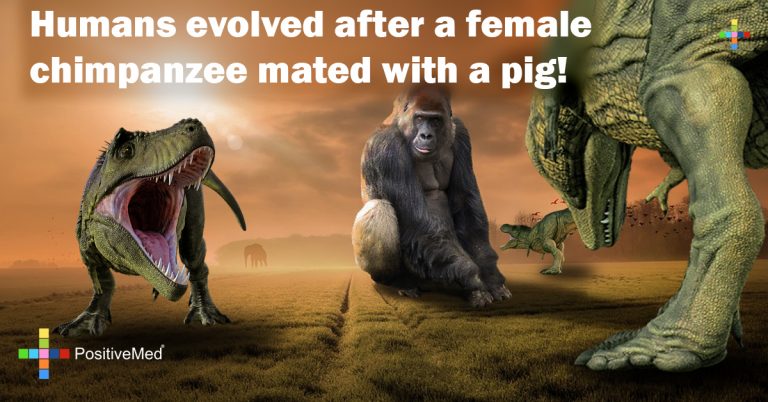 Human Evolution From Chimpanzee and a Pig?
By Divya Shree
Edited by Stephanie Dawson

There are many theories regarding the evolution of humans from animals but according to a new theory by Dr Eugene McCarthy, an American geneticist, humans evolved as a result of a pig and female chimpanzee mating. This surprising theory has been suggested by Dr. Eugene McCarthy at the University of Georgia. He is also one of the world’s leading authorities on animal hybridization.

At present, scientists believe humans evolved from chimpanzees which is backed by genetic evidence. According to Dr. McCarthy there are some similarities between human and chimps, however there are a number of characteristics that differentiate the two species.
Hairless skin, light-colored eyes, a thick layer of subcutaneous fat, heavy eyelashes, and protruding noses are some characteristics that differentiate humans from chimps. Studies also show a large number of common features between human being and pigs such as skin and other organs. Tissues and heart valves from pigs are used in the modern medicine for their acceptability by the human body. Scientists are conducting research to transplant kidneys and other organs from pigs into humans. Dr. McCarthy questioned if pigs and humans have nothing in common why can’t goat or any other mammal’s organs be used for transplantation into humans when pigs and goats are equally distant human relatives?

This new theory of Dr. McCarthy’s mating of chimpanzee and pig lead to a number of generations of backcrossing. The offspring of this mating lived among chimps and probably mated with them as well, this is the reason humans became more like chimps and less like pigs.

Pigs and chimps are unlikely to mate, however their reproductive anatomy and behavioral patterns make them compatible. Dr. McCarthy stated that if the entire population of a hybrid doesn’t end it will continue to improve in terms of fertility with each passing generation. It’s also found that the earliest recognizable humans existed 6 million years ago which means we have taken a long time in improving our fertility.