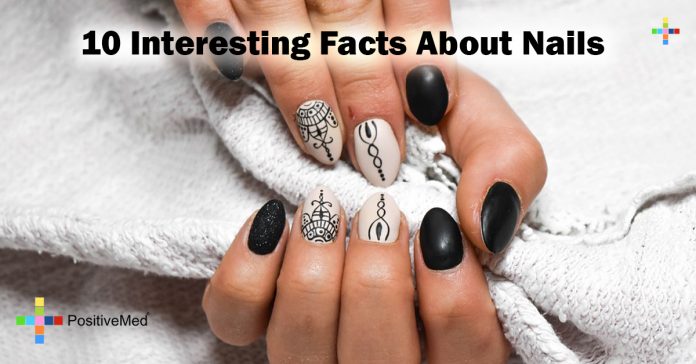 A horn-like envelope covering the dorsal aspect of the terminal phalanges of fingers and toes in humans, many non-human primates, and some mammals are called nails. A tough protein called keratin makes the fingernail and toenails. Here are some facts about nail:

Distal phalanx, fingertip, and surrounding soft tissues are protected from injuries by a healthy fingernail. It also helps to enhance the sensitivity of the fingertip.

Following are 10 interesting facts about nails:

• Many people believe that nail plates breathe but that is not true, nail plates are actually dead cells so they do not require oxygen, however oxygen, vitamins, and minerals are needed by nail beds and cuticles as they are live cells.

• The nails never sweat. The nail beds cannot perspire as they do not have sweat glands. The sweat you might notice comes from the skin around the nails.

• In addition to stress-related picking and biting, nail growth can be inhibited by chronic stress. For optimal nail health it’s important to manage stress and get plenty of sleep. The body’s nutrients and energy are diverted away from growing nails by chronic stress and fatigue.

• You may have noticed that sometimes a nail falls off after an injury. This happens because the nail plate needs blood flow, nutrients, and oxygenation to grow normally and an injury can disrupt the connections that provide the nutrition, so the nail may not be able to recover completely and eventually it falls off.

• Do not let your manicurists cut off your cuticles as they are there for a reason. The cuticle has its own importance as moisture and environmental germs are sealed out of the body through it. It must be given gentle treatment and should be left in place as much as possible.

• The growth rate of nails is 0.1 mm daily, so it can take between 4 – 6 months for a fingernail to re-grow completely whereas the period for a complete re-growth of a toenail is between 12 – 18 months.

• Nails grow faster when they are freshly cut compared to nails that are not cut often. This is why growing nails longer than an inch takes so much time.

• A dermatologist can tell a lot about your health just by examining your nails. Nail bed discoloration, capillaries in the cuticles, yellow, white, or banded nails all indicate some type of disease and at times the disease can be serious. If you notice something wrong with your nails or something unusual, do not ignore it and consult a dermatologist.

• The speed at which nails grow on both hands is different. The nails on your right hand will grow faster than your left hand if you are right-handed and vice versa.