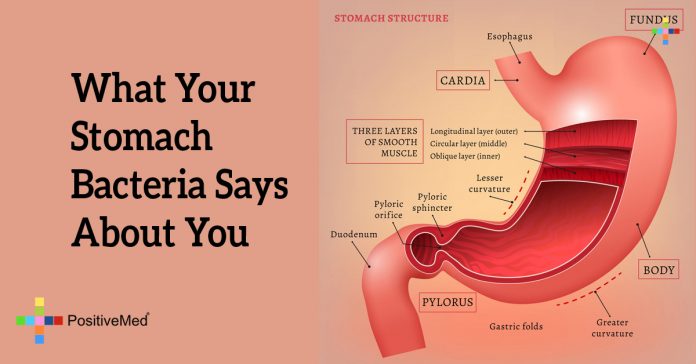 What Your Stomach Bacteria Says About You
By PositiveMed-Team
Edited By: Stephanie Dawson

• You found wisdom among the Dahlias

A study published in Behavioral Processes found a bacterium in soil which may be a cognitive enhancer known as M.vaccae. After eating a peanut-butter flavored dose of bug, mice navigated mazes twice as fast as those who did not eat this. A rise in serotonin is triggered by M.vaccae, which boosts memory and concentration and calms us. When we are around dirt and plants we inhale and ingest this microbe.

• You are influenced by your housemates more than you think

If you don’t like certain foods like yogurt, tempeh, or kimchi but your housemates eat them, it may be good news for you. The healthy brain-boosting microbes present in them have probably taken residence in you. James Scott, professor of occupational and environmental health at the University of Toronto explains, “A number of gut microbes form so-called spores – environmentally hyper-resistant cells that help to colonize them.” They are inhaled and ingested by us, found on surfaces and in dust.

• You are hungry… very, very Hungry

Your appetite may be controlled by stomach bacteria which can push you towards creamy, crunchy, and oozy foods they like. You may be surprised to know that your stool sample is enough to reveal what type of food you eat and whether you are slender or not. Your craving for junk food may be partly blamed on the bad bacteria and some bacteria may help you extract more calories from food and increase fat storage which means they make you gain weight.

You can try to preempt stress-triggered pig-outs, ¼ cup of yogurt twice a day, preferably unsweetened and probiotic enriched. After a month of this regime brain activity showed greater emotional stability, stronger connections between pain processing circuits and the prefrontal cortex, by volunteers in an MRI study at UCLA’s School of Medicine compared with the non-probiotic control group. One explanation could be that signals are sent out by good bacteria in the yogurt to increase serotonin, the neurotransmitter that is known to reduce anxiety.

• You are unable to burn off your muffin top

The wrong microbes can contribute to a larger belly and make it harder for you to lose weight. This might not be the only reason for your big belly but it certainly acts as a hindrance to burning off your muffin top and shedding excess weight.

• You really love a smooth red

If you think that dandelion greens are more compelling when paired with strong drink, there is good news for you, a study showed the polyphenols present in red wine have a probiotic potential as well. Ratio of good to bad gut bacteria was meaningfully boosted for drinkers who had one glass of red wine daily for a month. Sweet dessert wines that presumably feed the wrong microbes do not offer this benefit.