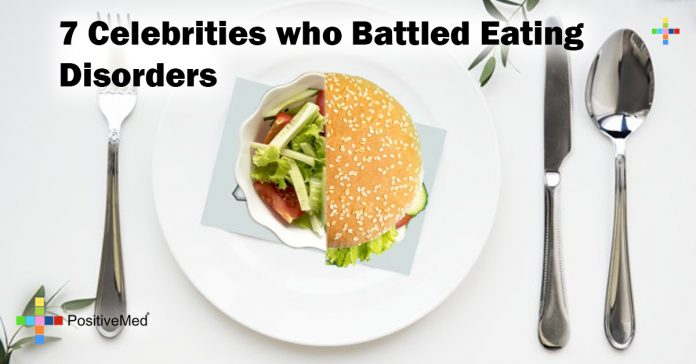 • Actress Lucy Hale, 23, the well known face from “Pretty Little Liars” once told Cosmopolitan that she used to have an eating disorder, she said that she had never talked about this openly, but she would go days without eating. At times she ate fruit then went to the gym for 3-4 hours.

• At a women’s conference in California Lady Gaga revealed that her voice was saved by overcoming bulimia. She purged so often that her vocal cords were eaten away by acid. S wanted to be a slender ballerina rather than the voluptuous Italian woman she is. The dinner table often had meatball, when she asked her father why she always given this food her father replied, “Eat your spaghetti.” According to her dieting wars need to be stopped by young girls.

• Jessica Alba
Once actress Jessica told a magazine that she had an eating disorder like many other girls, she was obsessed with it. She panicked when she went from a girl’s body to a woman’s, especially with natural fat in places they are designed to be. Jessica says she became so obsessed with exercise she dropped to 100 pounds. Jessica now maintains a much healthier lifestyle as a healthy mother.

• Mary-Kate Olsen
Well known for her performance as Michelle on “Full House,” actress, Mary-Kate Olsen entered treatment for an eating disorder in 2004. A courageous yet precautionary decision was made by her to be healthy.

• Nicole Richie
After much discussion with her father, Lionel Richie in 2006, Nicole Richie decided to undergo treatment for her low body weight. Nicole told magazines that her focus was on her health and that she was getting all the help needed to achieve this. She was also aware that this is not something which can be achieved in few days, it requires hard work and dedication for a long period of time.

• Ashlee Simpson
When Ashlee was 11 years old and taking ballet classes she had a minor eating disorder. Ashlee was 5’2″ and her weight was only 70 pounds. Her parents stepped in and made her eat. They made sure she ate well a good and healthy diet providing the nutrition she required daily.

• Jamie-Lynn Sigler
Talking about her eating disorder to a magazine, Jamie-Lynn says that it was hard for her to recognize herself. Her reality was so warped that she was not able to let go of her habit in spite of knowing that she had a problem and she needed to get better. She says that several requests from her family members to have a piece of cake went in vain.

• Karen Carpenter
The death of singer Karen Carpenter at the age of 32, who was 1/2 of the music group, The Carpenters, was attributed to anorexia. Its said that because of what happened to Karen, celebrities like Princess Diana and Tracey Gold decided to go public with their eating disorders.