PositiveMed The Positive Side of Medicine
Home Facts Everybody Has A Tattoo, But Nobody Talks About The Side Effects of Tattoo 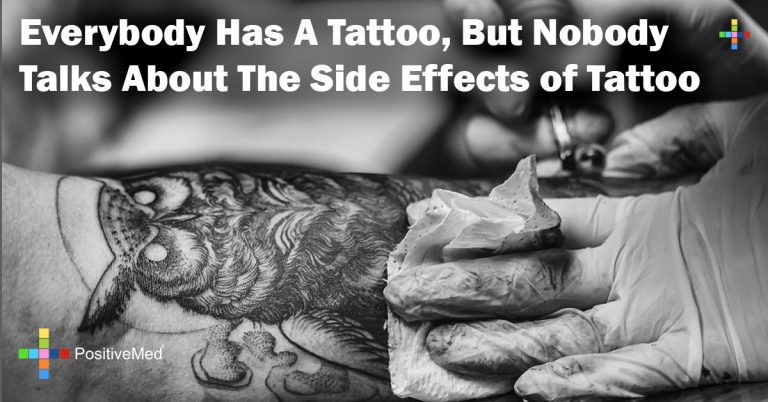 <h2>Everybody Has A Tattoo, But Nobody Talks About The Side Effects of Tattoo

By PositiveMed-Team
Edited By: Stephanie Dawson

Tattoos look good and are in fashion. If you are going to get a tattoo you will more than likely have it forever, to be safe look at an artist’s work, and go to a reputable professional, they are more expensive and well worth it. Americans have the highest number of tattoos. Some reasons why home tattoos might not be good for you:

1.Infections such as HIV and hepatitis due to re-use of needles

Reuse of needles for tattooing can cause severe diseases like HIV and hepatitis. One should avoid getting tattoos done from illegal tattoo parlors as the chance of infectious disease is highest at these places.

Reaction to tattoo inks, whether it is a temporary tattoo or a permanent, is common. If someone is allergic to ink they may not know that until the tattoo is done. Studies indicate that red and yellow inks are most likely to cause allergic reactions to the skin, whereas black, purple, and green pigments have been found to be less allergic. These reactions are generally triggered by exposure to sunlight.

Tattoos may lead to scar tissue. As the body attempts to remove the foreign substance (ink), bumps or small knots may form around the tattoo. Some skin conditions can also worsen due to tattoos.

Tattoo sites can become infected even with a sterile needle. This can happen if ink is contaminated by bacteria. Symptoms of an infection are: red rashes, swelling, and pain. It can take 2-3 weeks for an infection to appear.

Swelling or burning can happen in tattooed areas during magnetic resonance imaging (MRI) exams due to tattoos. Designs containing large areas of black ink can be problematic because black ink contains iron oxide, the iron is heated by MRI scanner either by inducing an electrical current or hysteresis. Newer inks are much safer, find out what your artist uses.

The part of skin where tattoo is done is discolored permanently. Even though over a period of times this discoloration fades away but it is never healed completely. So, one should keep this in mind before opting for a tattoo.

If you have had a tattoo done within the last week, you may not be allowed to donate blood because of the risk of infection. The wait can be longer if the tattoo parlor is not regulated.

The tattooing process can be affected by a regimen of blood thinners because of excessive bleeding. Ink finds it difficult to get into the skin due to increased bleeding. The aftercare healing is a long process.

A hematoma (bruise) may appear if a blood vessel is punctured during the tattooing procedure. These bruises can either appear as one large bruise or as halos around the tattoo.

Inflammation may occur if larger particles accumulate in the lymph nodes. However, if the particles are smaller, they are carried away and do not accumulate.