Why Bother Being Good? 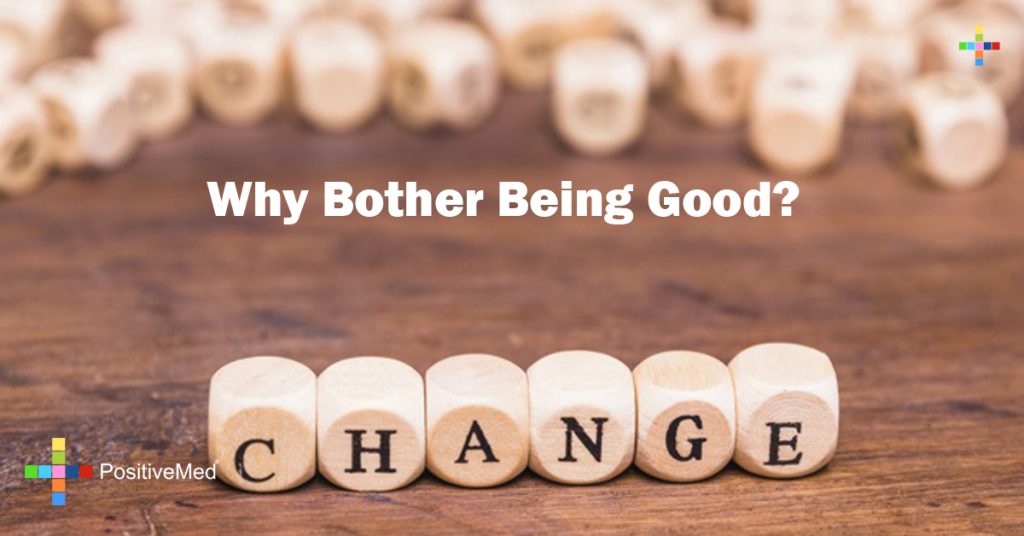 I don’t read the news too much. It seems only to focus on the bad, and I’ve come to realise that when people hear over and over, day after day, about bad things, it seems that they start to think that they are justified in being a little less noble themselves. ‘That’s just the world we live in’ – ‘everyone’s taking drugs’, ‘everyone cheats’, ‘everyone gossips’. The media makes celebrities of the worst of us, and subsequently, over time, people feel excused to drift into moral grey areas, asking ‘Why bother being good when everyone else is bad?’. Well if we can’t answer that question, we’re heading for a very dark world indeed, and so that’s the question I want to answer in this article. Why bother being good?

“I propose being the change… Don’t lose your self-respect”

I’ve asked myself this question before in the darkest hours. Of course, like everyone, bad things have happened to me in my life. I’ve been mugged twice, burgled twice, and had a gun to my head in Rio. My dad died when I was 15, I’ve had 2 cheating ex-girlfriends and one gold-digger (even though I didn’t have any gold!). I’ve broken bones, had 3 near death experiences, in a car, on a motorbike and on a jet-ski, and in my first year in music, I’ve been let down and lied to more than I’d like to admit. But hey, everyone has a few sob stories!

You see that’s the thing. Bad things happen to everyone. The world is tough and fucks ups will occur. So what do you do? Do you crumble? Do you use these events to justify doing things that you know you shouldn’t? Do you get your own back on the world? We live in a culture of endless blame and vengeance, which might suggest that any of these reactions are righteous or at least justified, but I propose a different idea. I propose being the change.

You don’t play the victim, you don’t look for excuses, you don’t lose your self-respect. The reason is simple. You see, self-respect is the single greatest commodity a person can own. With it, you can take on any challenge, bounce back from any fall, make everything go right. You know that you deserve the best, so go out and you get it! You don’t shy away from opportunities, you make them! You don’t run away from love, you embrace it and make more! Suddenly you stop being the effect, and start being the cause over your life; you have control!! You know who you are, you know where you’re going, and you can say this with certainty because you know that when you make a decision, you stick to it and see it through.

You keep your ethics, because that’s the one thing that separates you from the worst in humanity. You lead by example. You stay unequivocally true to what you know. Irrespective of whatever anybody else says or does, irrespective to how hard or easy it is, you stand unwavering, on the right path. That’s character. It doesn’t allow for excuses, justifications, reasons. There are no limits, integrity has no compromise. You have to cultivate love in your heart in order to see and feel anything worthwhile in this world. Love, truly, is without pre-requisites or prejudice, without terms and conditions, without negotiation. It’s easy to love when you keep to your ethics, because you feel like a good person worthy of love and are therefore full of it.

How do you become good? You just decide. You stand up, you say I am a good person and I will not let anything change that. And you really mean it! You say that with the same certainty you say that the grass is green and the sky is blue.

It’s an easy decision to make because we are all inherently good. Being good therefore doesn’t mean carrying this heavy weight of morality, it’s actually you shedding the weight of the guilt and negativity and bullshit you’ve been carrying around and growing on your back for no reason all these years.

Chose to be someone worthy of your pride, respect and admiration, and you will flourish and prosper. That is why you should be good, and that’s how we make a happier world. Walk with passion in your heart and your head held high.

In October 2011, Stephen Ridley quit his high flying job at a top Investment Bank in pursuit of his dream.

24 hours later, he pushed an upright piano onto one of the busiest streets in London and started playing.

1 month later he released his first album, Butterfly In A Hurricane, now on iTunes; an autobiographical album exploring 3 years of love, lust and loss. “I recorded it the old way, 2 microphones and everything in one take.. I recorded the album in less than an hour. It’s very rough round the edges and a long way from ‘the sound’ I want to make, but it’s my first step in music and it’s got a piece of my heart in that record. The song Butterfly had me and the sound engineer in tears at the recording! It’s pages from my diary.”

That was the start of a journey which has so far taken Stephen to 26 countries sharing his incredible talent and passion for life. What’s more, everything he has done so far has been entirely though word-of-mouth! “It’s a struggle, more than I could have imagined actually, but I wouldn’t be able to do what I do at all without amazing people just talking about me! They’re my Ridlers!”

A soulful writer and a truly mesmerising performer, the future looks bright for this magnetic and unique artist!

PrevPreviousBreakfast To Go!
NextTop Natural Remedies For Sinus Congestion You Can Make at Home!Next