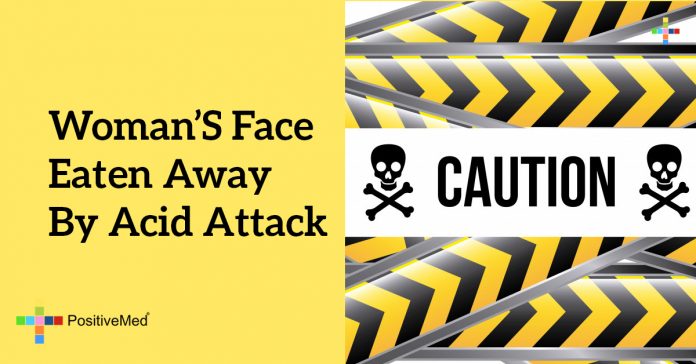 48-year-old Patricia Lefranc was viciously attacked few years ago by her jilted lover when she tried to end the relationship.

Her married and spurned love Richard Remes, 57, sprayed sulphuric acid on her face and upper body leaving her horrifically disfigured. Lefranc also lost the sight of one eye and became partially deaf.

She thought she was going to die, but neighbors, hearing her screams, managed to get her to the hospital in time. She spent three months in a coma before regaining consciousness.

To date, she has endured 86 operations and still has 20 more to go reconstruct her body and her face.  Two years later the acid continues to erode her skin, eating away her nose.

“I lost the sight in my left eye, and hearing in an ear; my right ring finger was amputated. By the time I got to my 80th operation, I stopped counting,” Ms Lefranc told  UK media.

Last week, at the trial of Remes for attempted murder, UK’s Mirror reported that jurors were handed a shocking naked photograph of Lefranc deformed by the acid.

Earlier this week Remes was sentence to jail for 30 years.

There are thousands of victims of acid attacks everywhere around the world. Like this young child from Bangladesh:

Perhaps one of the most famous acid attack victims is Ameneh Bahrami, a 36 years old woman from Iran. She was attacked by a bucket of acid by her ex-lover in 2004 only for refusing to marry him.

Sadly after 17 plastic and reconstructive surgeries, she remained disfigured and blind from both eyes. She requested the court to do the same thing to her attacker and make her attacker blind, but later she forgave and pardoned her attacker.