PositiveMed The Positive Side of Medicine
Home health Dermatology What It’s Like To Have Dermatographia, A Condition That You Can Draw On Your Skin 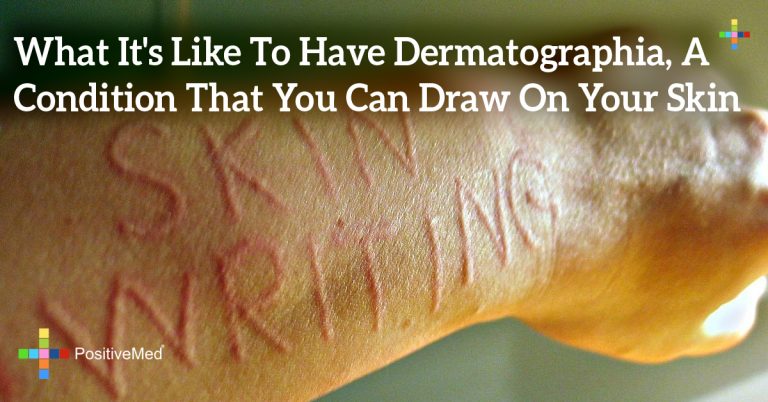 Do you know any condition that lets you experiment with your body? Well… it definitely isn’t the flu! There are a few obnoxious skin conditions, like psoriasis, that bring you unbearable suffering. It appears that dermatographia is not the one. Some innovative “patients” actually made use of the condition to nourish their creative talents. They make art and share it with others. Let’s see what all the dermatographia fuss is about.

Dermatographia also called “skin writing condition”, affects about 5 percent of the population. The skin of an affected person is special. It behaves in a way that sensitive skin does but the intensity of this responsiveness is taken to the extreme. It’s particularly responsive to the outer stimuli, even if only slightly brushed against something.

Dermatographia hyper-sensitizes the skin to touch, diet, stress, and chemicals. The skin of the person affected is extremely reactive every time even when it’s only rushed or scratched. The result of even slight touch, welts, lasts for about half an hour and doesn’t hurt. They can be itchy, though! It doesn’t have a known cause or cure, but there are a few smart ways to manage it. What helps to calm down the irritated skin? Normally, a natural oily moisturizer of almond or coconut will do the job. Another thing to take control of is stress. Good management in this field can work wonders for the skin.

Imagine that even a simple rubbing under the eye (we do it much more often than you imagine!), evokes an “OMG!” peer reaction each time because you look as if you were beaten up by your husband. This condition is a good gossip provoker! No wonder that sufferers aren’t filled with joy about having dermatographia at the beginning of their path. Those who aren’t attention-seeking stars, at first find it rather embarrassing to attract attention daily. Especially because it’s not about your intelligence, humor or cool fashion style, but a skin condition.

But there is someone who changed the way we think about the skin condition called dermatographia. Our female-hero discovered she had been suffering from dermatographia only many years after the condition took off. She was used to naming her skin “sensitive”. Once, when she scratched her knee, and a welt traditionally appeared, she liked it and shot a pic. Those initial artworks attracted the attention of her art school professor and peers. They convinced the girl to look for the reason for such an excessive skin reaction. Happily, the first dermatologist she went to, diagnosed her with dermatographia instantly. So the great unknown was finally uncovered!

The love and hate attitude to your skin is normal if you happen to have dermatographia – the artist confirms it with all her heart. She knows that while the condition isn’t debilitating, there are many aspects where social life shakes the “patient” and puts him or her in the feelings of shame and anxiety (especially at a young age, or when a welt is forming on the face). She claims that being constantly embarrassed by her skin among others wasn’t the solution in the long run. Sure it does behave unpredictably and weird, but loving and honoring it sounds much better than pure hatred.

After being encouraged by peers and teachers from the art field, she decided to pursue photographing her condition. Now she showcases her work on the webpage. This way, she not only met an entire community of people with dermatographia online (social media wins the world), but also helps them as a source of knowledge. Many doctors have never heard of this condition. Some people were never diagnosed before coming across her photos. She even affectionately calls others with this condition “skin writers”. There’s nothing as connecting and sharing!

To which level of craziness, did her creative liberation take her? She plays with skin-drawing with a stylus, like a knitting needle, to get some significantly pronounced welts. She doesn’t take it to the extreme, but using devices is a step further. What’s more, it’s not always spontaneous. Sometimes she creates freehand, but she also uses stencils prepared especially for this occasion.

All of a sudden, during group meetings she’s invited to, she shares her art are. It’s not about complaining about the skin condition but showcasing how she draws on it. And people find it remarkable! It makes her unique. Hiding her skin is not a case anymore. Just the opposite.