10 Reasons You Bleed After Sex, According to Doctors 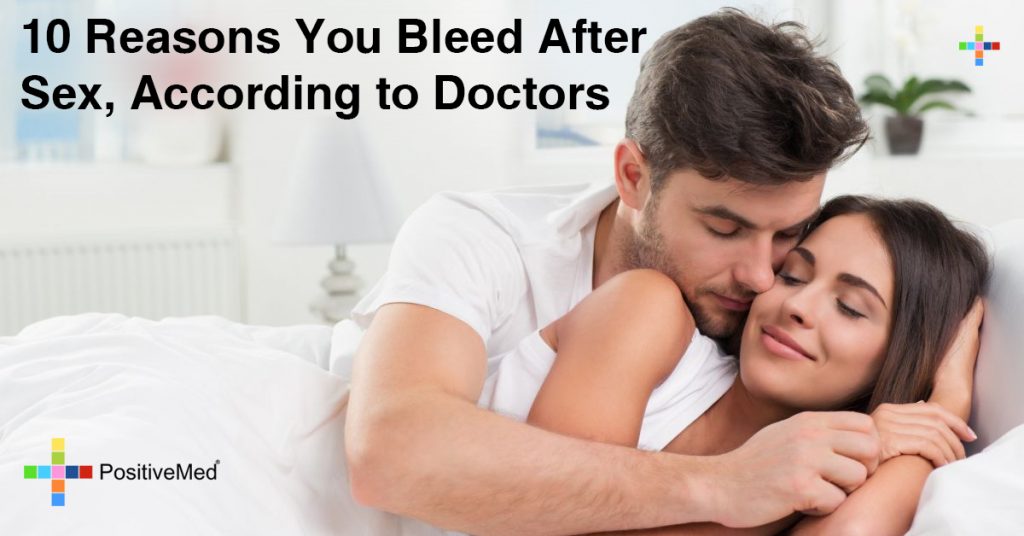 It’s not exactly a subject you want to talk about. However, many women experience it. If you bleed after sex, there’s a reason for it. In fact, there can be several reasons. Seeing blood freaks out most people, but let’s calm down, and keep reading.

At some point, almost 10 percent of all women have experienced post-sex bleeding.

1. First Sexual Experience. If you’re a virgin and having sex for the first time, bleeding can occur. The hymen is a tissue layer covering part of the vagina. When the hymen is broken through sex, bleeding can result.

2. Vaginal Dryness. Here’s another reason for finding blood after sex. Dryness of the vagina does not produce enough natural lubrication. Penetration can cause tearing. Doctors recommend using personal lubricants and having adequate foreplay first.

3. Rough Sex. Some women notice it after a wild romp in bed and/or with a partner who has a large penis. Both can cause tears in the vagina, pain and some bleeding.

After sex, some medical experts advise taking a cool shower and wearing a pad.

4. STI Disease. A sexually transmitted disease like chlamydia or gonorrhea can lead to inflammation of the cervix area. Bleeding can result along with itching, abnormal vaginal discharge, etc.

A gynecological appointment should be made to treat the condition.

5. Cervix Polyps. This is rarely a malignant condition. It can create bleeding when the penis is pushing up against these growths. The polyps are like fleshy growths, says the Merck manual.

The polyps don’t cause symptoms until after sex. They can be found during a pelvic examination.

7. Eczema/Dermatitis. A genital rash in the vaginal area that comes from eczema or dermatitis can cause you to bleed after sex. If itchy, scaly rashes are noticed around the vagina, a visit to the dermatologist can help.

8. Menstruation. Sometimes, a woman’s period starts during sex. However, it isn’t the sexual act creating the blood. It’s coming from the monthly flow.

9. Cervical Ectropion. Another of the common reasons for post-sex bleeding is a harmless condition called cervical ectropion. It involves the delicate cells of the cervix. Instead of being inside the cervix, these cells appear on the outside. There are treatments to help.

10. Vulvar Condition. Two common culprits could be causing tears at the vaginal opening. Lichen planus and lichen sclerosus are autoimmune diseases that can result in post-sex bleeding.

Doctors advise scheduling a gynecological visit when you experience bleeding post-sexual intercourse. Don’t suffer in silence. There are treatments to relieve symptoms, so you can enjoy a healthy sexual lifestyle.

PrevPreviousAsk a Sex Therapist: Why Is It So Hard to Make Eye Contact During Sex?
NextIs Breakup Sex Ever a Good Idea?Next