PositiveMed The Positive Side of Medicine
Home health Fitness and Exercise 2 Teens Hospitalized with Kidney Damage After Doing 1,000 Squats 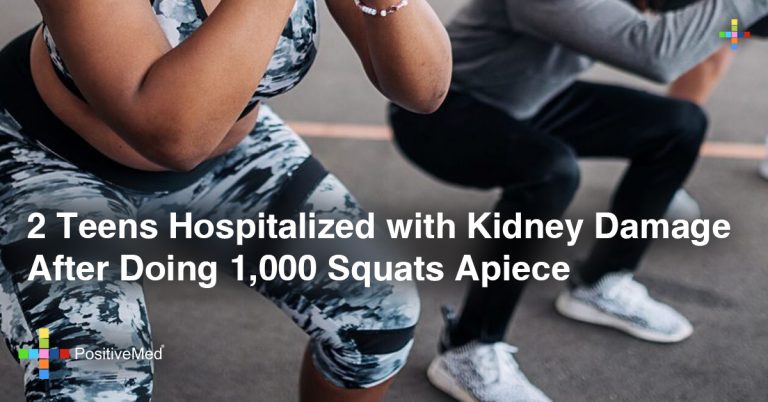 [nextpage title="..."]
Most teen girls and adult women do squats to achieve a more rounded behind. Two girls from China, however, took it way beyond the normal scope. After performing about 1,000 of the exercises each, here are the facts: There are 2 teens hospitalized with kidney damage, say authorities. Please, do not try this at home. There could be very serious consequences. A squatting contest is not worth it no matter how physically fit you are.

Live Sciencedid a report on the squatting incident and discovered quite a story.

Two or three hours of squatting was all it took to cause medical issues for both teenagers. According to the report, the girls felt sore following their contest. Within two days, their symptoms had escalated, Both young women were sent to the emergency room and placed in the intensive care unit. They complained of brown urine and an inability to bend their legs.

There is a medical word for what the teens had developed. It’s called rhabdomyolysis and can cause permanent kidney damage. The muscle breaks down and releases a protein into the bloodstream.

The Philly Voice says that the girls had to be hooked up to IV drips. That would help clear the protein from their bodies.

What the teens were doing is extreme over-exertion. It would be dangerous for anyone to do, man or woman, young or old, say fitness trainers. [/nextpage]

According to reports, the 2 teens hospitalized with injured kidneys started an innocent exercise match. One of the girls challenged her friend to a squat contest. Neither had any idea they would develop dangerous consequences.

Xiao Tang claims she was the champion and says she’s embarrassed by the publicity. Tang told the China Press that neither girl wanted to lose to the other. So they kept squatting and squatting. The next morning, however, her legs could not bend properly. When her urine turned brown, she knew she was in trouble.

Exercise experts don’t want people to be afraid to do squatting at the gym or home. The exercise position is an excellent one that targets your behind and thighs. Squats strengthen your core and tone your calves and hamstrings.

A lot of female celebrities and non-celebrities do squatting for a better rear end. Reality TV stars like Khloe Kardashian hit the gym and do weight-training, boxing and plenty of butt exercises.

Khloe’s trainer, Gunnar Peterson, tells Self.com about her crazy work-outs. He has her do advanced squatting called split squats. Khloe performs the exercise with her front foot elevated on a Bosu ball.

Khloe Kardashian is said to have an enviable behind, and women want the same.

Exercise trainers say that it’s good to work hard, but listen to your body. In other words, don’t do anything dangerous.

Thankfully, the two girls from China are doing well. They will never attempt a foolish fitness challenge like extreme squatting again.

Kidney damage is frightening and could have been deadly for the 2 teens hospitalized. [nextpage title="..."]