PositiveMed The Positive Side of Medicine
Home health Woman Had a Huge Tapeworm ‘Egg’ Encased in Her Brain. Why She’s Super Happy About It 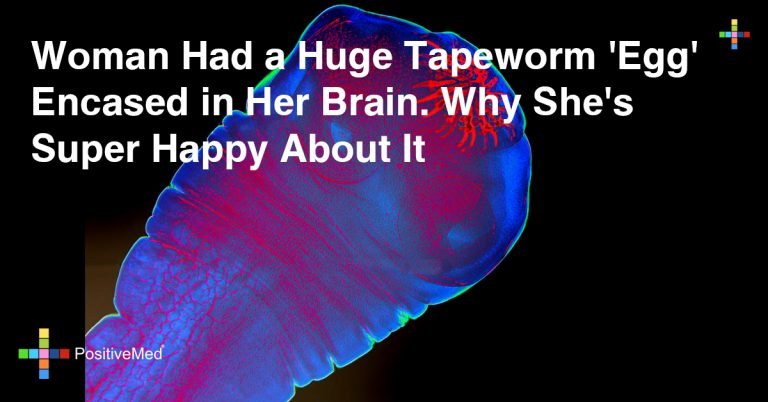 In January 2018, Rachel Palma, a 42-year-old resident of New York, went to her doctor complaining of symptoms such as a tendency to drop things and difficulty remembering words — symptoms that pointed to a neurological condition of some kind.

Her doctor ordered an MRI which revealed an odd-looking lesion in her brain, which indicated she might have a cancerous type of brain tumor. The doctors performing the surgery, however, found that the lesion was not a tumor at all but a tapeworm egg.

Brain tumors are usually soft and squishy, but the cause of Palma’s problems was hard and seemed more like a quail egg or rock. The baffled doctors removed the mass and placed it under a microscope. As they cut into it, they saw a baby tapeworm wriggle out.

One of the doctors, a neurosurgeon at New York’s Mount Sinai Health System named Dr. Jonathan Rasouli, was openly relieved to see the tapeworm. Until then, he and his colleagues had feared that Palma had a malignant brain tumor, an aggressive type of cancer that can kill.

Palma actually had had neurocysticercosis, a disease caused by the pork tapeworm (Taenia ). People contract the condition by unwittingly swallowing the tapeworm’s microscopic eggs.

Once a tapeworm egg hatches, the larva travels throughout the body and eventually forms a cyst in places like the brain, eyes, muscles, or skin. Tapeworm larvae are often drawn to the brain because of its rich blood supply.

Palma did not need any other treatment other than antibiotics after the surgeons removed the tapeworm cyst.

The doctors are still baffled as to how Palma had contracted neurocysticercosis in the first place. While the pork tapeworm is common in some developing countries, it is rare in the United States. Nor did Palma have any of the risk factors:

She hadn’t eaten undercooked meat or traveled abroad. Roughly 1,000 people in the United States are hospitalized with neurocysticercosis, but most such patients had recently traveled to places like South America.

According to the World Health Organization (WHO), people get pork tapeworm by eating undercooked or contaminated meat or drinking contaminated water – none of which would seem to apply to somebody who has never left the United States.

In addition to causing the symptoms that Palma had experienced, neurocysticercosis can cause blindness and severe headaches. It is also one of the most common causes of epilepsy in the world.

In fact, neurocysticercosis might cause nearly 1/3 of the cases of epilepsy in regions where the tapeworm is endemic. About 80 percent of the 50 million people in the world who have epilepsy live in countries with low or middling incomes.

Neurocysticercosis is especially common in places where people live with pigs.

Doctors can often treat neurocysticercosis with a round of antibiotics if the cyst is small. Palma’s cyst was too large for that, so they needed to surgically remove it. While Palma was revolted to learn that she had been infected with a parasite, she was extremely happy and relieved to learn that the doctors had removed it and that she did not have a brain tumor.