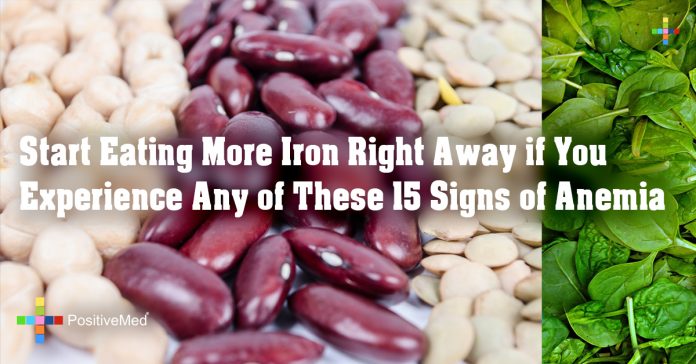 An iron deficiency may not seem like a serious health issue at first, but over time it can lead to an assortment of issues that can be detrimental to your mental and physical well-being. Unfortunately, many symptoms of an iron deficiency can be attributed to other things, or be something you’ve dealt with so long that you don’t recognize them as signs you have a problem.

When your body does not have adequate levels of iron, you may feel tired and drained. Iron deficiency can make you feel ‘out of sorts’ as if something is not quite right with your body. Iron is responsible for the production of a protein called hemoglobin. This protein delivers oxygen to red blood cells. If you are suffering from an iron deficiency, your red blood cells are literally gasping for air.

Here are fifteen signs to look out for that could point to a lack of proper iron in your body:

This is one of those signs that can be hard to recognize as a symptom of low iron. There are many reasons you could be tired all the time, and a less oxygen being carried to your bodily tissues due to an iron deficiency could be one of them.

Extreme Paleness
Without proper hemoglobin in the skin, it won’t retain a healthy color. Low levels of iron can lead to this lack of hemoglobin and cause your skin to be much paler than normal.

Shortness of Breath
Once again, iron helps get oxygen to the systems of the body. If you aren’t getting enough oxygen, you won’t be able to breathe normally.

Pounding Heart
One of the more serious signs to watch out for is a heart that seems to be working much harder than normal, especially if you haven’t been doing anything strenuous to get your heart rate up in the first place.

When the body thinks it needs to be in survival mode, it will focus on keeping the most important systems running first. Hair growth and retention will not be a priority and so you might start losing your hair.

Under-active Thyroid
The thyroid helps keep your metabolism going. A deficiency in iron can slow down the normal functions of the thyroid so you’ll end up losing energy and gaining weight.

If there isn’t enough oxygen going to the brain, it will compensate by swelling arteries, which can lead to headaches on a regular basis.

Muscle Aches
Without enough iron and oxygen, muscles will have trouble recovering from even a low-impact workout. Soreness will last much longer than it should.

Brittle Nails
One of the most visible signs that something is not right with your body may be fingernails that are thin, weak, and discolored.

Frequent Infections
Nothing in the body works right without the proper amount of iron and oxygen, including the ability to fight off infections. Some people with iron deficiencies find themselves sick on a much more frequent basis than normal, especially with respiratory infections.

Anxiety
Low levels of oxygen can cause the sympathetic nervous system to jumpstart, which in turn can lead to a feeling of anxiousness, whether you have a reason to be anxious or not.

Trouble Focusing
Another sign of iron deficiency that can be hard to recognize as such is an inability to properly focus. This problem can be attributed to many things, and a lack of iron is one of them.

This sign goes along with trouble focusing. It can be easily attributed to other health issues, but is also a sign of iron deficiency.

Lack of Endurance
If your muscles, your heart, and your other bodily systems aren’t working correctly, you won’t have the endurance that you should for things like exercise or even walking and doing household chores.

The first step in getting over an iron deficiency is recognizing that you have one. If you have experienced some or most of these symptoms you should consult a medical professional. They can do tests to determine if the problem really is a lack of iron, and then give you help on getting your iron levels back to a healthy amount. By knowing the 15 signs of iron deficiency, you can correct the problem and live a healthy life.