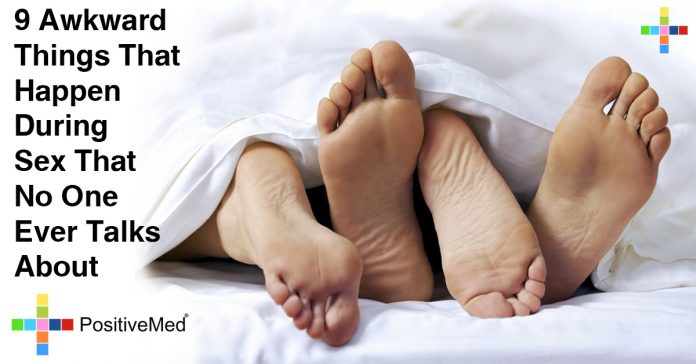 Sex. It’s that part of life that nearly everyone experiences but never truly feels comfortable talking about. The media has a way of making you feel like you’re either not doing it right or not having enough, and it can be especially difficult for people who aren’t sexually active to finally start doing the deed only to discover it’s a far cry from what you see in the movies.

Awkward things during sex can be embarrassing, but they can also be a moment to laugh and bond with your partner. These nine things are pretty common during any time of physical intimacy, and you shouldn’t let the fear of awkwardness kill the mood. Instead, learn to laugh and make memories with your partner. After all, what’s good sex if you can’t laugh with the person you’re having it with?

Many partners incorporate oral acts into their foreplay, but one thing no one wants to think about or deal with are stray pubic hairs that get caught on your tongue or in your teeth. It can be uncomfortable, to say the least, especially if your partner goes in for a kiss while you’re still trying to figure out how to dislodge one of the foreign hairs.

Don’t worry, though. Just use your tongue and get creative. Licking the inner thigh or kissing a bit deeper can be a good way to remove any undesirables.

One of the most awkward things that can happen during any sexual act is an unintentional fart. It may not even be the typical kind you expect; bodies rubbing together can make a lot of noise, some of which are pretty distracting and may have you asking, “Was that you?”

It seems sexy in your thoughts, but a steamy romantic interlude can quickly become sticky and gross when someone starts to sweat as they’ve just run a 5k. People who sweat easily are likely going to drip onto their partner, but it’s nothing to be ashamed of. Maybe just bring some extra towels or try less direct positions to avoid too much drippage.

It’s not hot, in fact, it’s downright uncomfortable. You wind up wasting water and hurting your knees trying to find the perfect position, and no one even comes out feeling refreshed. If anything, you’ll need another shower after just to regroup.

The thought of anyone watching you get it on is awkward enough, but imagine a Golden Retriever just staring you dead in the eyes while your partner mounts you from behind. Even worse, there are plenty of curious cats and dogs that like to hop on the bed and try to join in on the fun.

Make sure that you shut the door the next time you and your partner want some interrupted alone time.

It’ll happen to all of us at some point. Whether it was too much foreplay or you were just that turned on, you’re going to wind up reaching climax only a few minutes into the game. You’ll have to either kindly let your partner down and ask them to wait for another round, or you can try to finish them off.

Do you know the saying that some men only think with their D? Well, ask anyone who has ever struggled to get an erection and they’ll tell you that isn’t the case. Your mind may be ready and raring for action, but your boner is nowhere to be seen.

Although this can be embarrassing, just use it as a chance to please your partner instead.

You may forget to lay down a towel when it’s time to get down and dirty, which leaves the unseemly wet spot on your sheets. Don’t be embarrassed, though. Just laugh it off and change the linens. After all, it’s only a sign that you enjoyed yourself.

A Word of Advice

Awkward things during sex can be embarrassing, but they can also be hilarious and make for some great memories later. The best way to avoid feeling humiliated during an awkward moment is to feel comfortable with the person you’re sleeping with. Never have intercourse with someone just because you feel pressured; the best sex always happens when everyone consents and is eager to please one another