Although the relationship between Brittany Gibbons and her husband Andy was not on the rocks, something was not right. And as much as the threat of divorce was nonexistent, she had lost confidence in herself and her body after her third child. Brittany always hid her body, shut off the lights while getting some, and avoided her husband’s eyes whenever she was either changing or showering. She, however, devised a plan after noticing that one of her friends had an incredibly healthy physical relationship. In her plan, she and her husband Andy would have daily amour for a whole year and wait to see what happened. 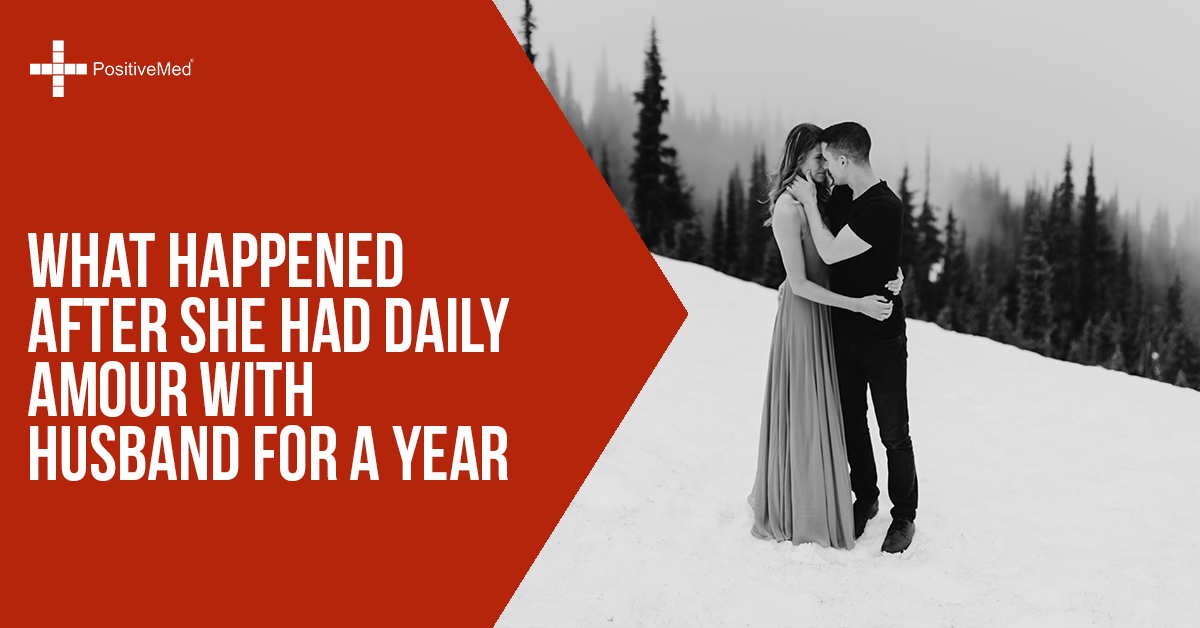 RELATED ARTICLE: How She Learned to Love Nearness Without Shame After a Bad First Experience

Carrying out the plan was however not that easy at first. Her duties as a work-from-home mother of three left her flat out exhausted on some days. On other days she merely wanted to curl up and watch some television before bed. Fortunately, the daily amour became more natural as time passed, and their relationship got even better than before.

RELATED ARTICLE: How To Entirely Improve Your Relationship In 1 Month

As described in her article featured in Good Housekeeping, she started noticing some changes, even though they transpired slowly. Brittany began looking forward to getting some as the months passed. Daily amour begat more passion, and they’re loved up, connected feelings started creeping outside of their bedroom and into their everyday lives. The couple became more romantic with one another, kissing longer before work as opposed to the cold, familiar peck and touching arms as they passed each other. Their relationship grew stronger and better during that time as their intimacy flourished.

Brittany also noticed a few significant changes for herself personally over the course of the year. Three months after they began executing the plan, she found herself truly enjoying physical affections again. And six months later, she no longer felt shame in the bedroom with regards to her curvy body. She became more concerned and focused on enjoying the moment as opposed to her body’s actions during the act.

A year later, Brittany noticed a complete change regarding her confidence in both their relationship and her body. The prospect of being naked in her room no longer frightened her seeing as she had successfully shrugged off the associated anxiety. She stopped running to her closet after showering and even prepared school lunches in her underwear. Despite her achievements, she still admits it was not among the easiest things she has had to do. The daring act is certainly not typical when it comes to most relationships.

Most couples do not get some on a daily basis. Instead, they are busy getting stressed at work, paying bills, or coordinating their children’s soccer schedules. Even though fitting physical affections into all of these responsibilities is a challenge, it should be a necessity. Getting some is what reminds couples that on top of being roommates charged with the lives of their kids, they are more important intimate partners.

Getting physically affectionate on a regular basis definitely helped Brittany and her husband. It also enhanced her self-confident, enough that she now knows she will survive if the worst happened. Lovemaking on a regular basis will not necessarily to make your marriage immune to infidelity, divorce-proof, or without angst, but it will significantly enhance your self-esteem.

Conclusion
Getting some is usually a personally liberating experience. As a fundamental socio-emotional function, not getting physical affections when and how you want often leads to a lot of angst, feelings of inadequacy, and self-doubt. It is also notable that research links regular, pleasurable lovemaking to multiple health benefits. The benefits include lowering stress, relieving pain, improving the performance of your heart and immune system, and keeping your body in optimal shape.