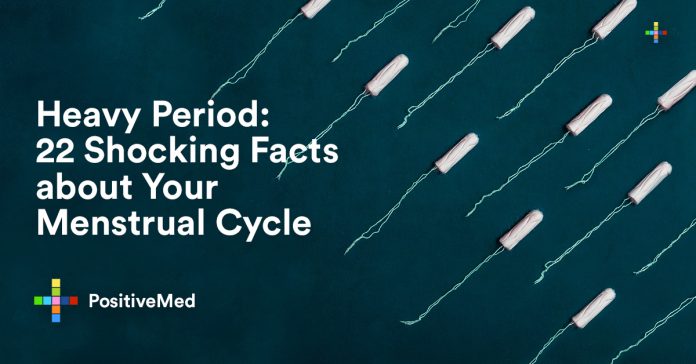 Most of us know the basics of our periods – why we get them once a month, how long they last and the kind of pain we can expect. Although we hate them, it can be pretty scary when you skip your period. But there are plenty of simple things that we bet you don’t know about your period – like how the weather can affect it, how many eggs you lose with each cycle and how many days of your life you spend menstruating.

22 things you didn’t know about your periods

From strange facts about periods to helpful tips on how to control your PMS, let us take you through our list of 21 things you probably don’t know about your periods.

1. The weather affects your periods

A study published in Gynecol Endocrinol noted that women have shorter menstrual cycles in summer and longer ones in winter. The main cause for this change in the cycle is that women have increased FSH (follicle stimulating hormone) secretion in summer as compared to winter. In addition to this, the cold weather tends to make us sluggish and less likely to exercise which can aggravate the problem as regular physical activity is linked to more regular and manageable cycles.

2. You CAN get pregnant during your period

Earlier it was believed that having sex during a menstrual cycle would prevent pregnancy. However, sperm can live up to 5 days in the inside of a woman’s body so if a woman ovulates soon after her period, she can still get pregnant.

3. Heavy periods can cause anemia

Heavy periods reduce the number of circulating red blood cells which can result in anemia. Red blood cells are responsible for carrying oxygen to every organ in your body so even mild anemia can result in fatigue, weakness, and headaches. If you experience heavy periods that last for over a week, you might need iron supplements to prevent anemia.

4. You lose approximately 1000 eggs during each cycle

As most of us know, a woman ovulates and releases one mature egg during each cycle (female fertility 101!) which may lead you to believe that you lose just one egg per cycle. However, from puberty onwards, every woman loses about 1000 eggs per cycle. This may seem like a large number until you consider that each of us is born with approximately 2 million eggs!

5. Your body weight affects your periods

Our fat cells produce estrogen – the hormone that regulates the thickness of the uterine lining. Women who are overweight have more fat cells which translate to higher estrogen levels. This is why obese and overweight women are more likely to experience heavy periods while women who are underweight are likely to have scanty periods.

6. Smoking can make your periods heavier

Cigarette smoke contains over 7,000 chemicals – several of these chemicals alter endocrine function which can lead to a hormonal imbalance. Recent studies show that smoking is associated with heavy periods as well as painful menstrual cramps. There is a direct correlation between the number of cigarettes smoked and these effects which means that heavy smokers will experience more period problems as compared to light smokers. In addition to affecting your menstrual cycles, smoking can also kill your eggs which will result in the early onset of menopause.

7. ‘Period brain’ may be a real thing

Men often complain that women use their periods as an excuse for everything from mood swings to food cravings. However, some research indicates that a woman’s menstrual cycle may even be linked to decreased cognitive abilities. While the scientific community has not yet reached a consensus on the effects of menstruation on cognitive function, it’s quite possible that your period brain fog is not just your imagination.

8. Your periods affect your libido

Don’t be surprised if you find yourself acting like a 16-year-old guy, despite your cramps and general crankiness! The hormone progesterone lowers a woman’s libido – since women produce less progesterone during menstruation, they are more likely to be interested in sex during this phase of their cycle.

Menstrual cramps range from mildly uncomfortable to completely debilitating – but no matter where you are on this pain spectrum, sex can help decrease your discomfort. Earlier, period sex was considered a taboo subject but it has gained acceptance in recent years. Sex can reduce period pain as orgasms increase blood flow to the uterus which helps to relieve the cramps. Furthermore, at the moment of climax, certain chemicals are released in the brain which acts as natural pain relievers.

10. Periods can make you smell unattractive to men

Each of us has a distinct body odor but this scent can vary depending on where we are in our monthly cycle. A study found that men’s testosterone levels rose when they sniffed the T-shirts worn by women who were ovulating but decreased when they sniffed T-shirts of women who were not ovulating. This change in a scent can be linked to pheromones – natural chemical substances secreted by your skin.

11. Women’s periods do NOT sync up

Earlier, it was believed that if women spent a lot of time together, their periods would start to sync up with each other. “Period syncing” has been debunked in recent years when scientific studies showed that similarities in cycle start days were purely coincidental and that living together did not increase the likelihood of women’s periods syncing.

12. We start our periods at a much younger age compared to our ancestors

200 years ago, the average girl got her first period when she was 16 or 17 but today, the average age is just 12 years. Many girls now get their periods when they are as young as 8! While scientists are still unsure about the exact reasons for this change, they hypothesize that it could be because modern girls are heavier than pre-modern women – since fat produces more estrogen, women start menstruating earlier. Another possible reason is stress – preteens are under a great deal of stress which could have an impact on their hormonal balance and result in the early onset of menstruation.

13. Your period can make your asthma worse

Up to 40% of women with asthma are affected by premenstrual asthma (PMA). PMA is worst in the week before your period and although the exact causes are unknown, it is believed that the luteal phase of the menstrual cycle can cause airway hyperresponsiveness leading to an increased sensitivity to allergens.

14. Your period makes you a compulsive shopper

Hormonal triggers bring on mood swings and stress associated with PMS which can dampen a woman’s capacity for self-control. Hormonal triggers can also bring on mood swings and other irritability symptoms associated with premenstrual syndrome, also known as PMS. Furthermore, some researchers say that women may feel compelled to make self-indulgent purchases related to their appearance because they are unconsciously driven to attract a male. A recent study found that 48% of women who admitted to impulsive and excessive spending were premenstrual as compared to 18% who were mid-cycle.

15. You can use a nightlight to help regulate your cycle

Exposure to artificial light affects the secretion of the hormone melatonin which in turn helps to control the production of female reproductive hormones. Since these hormones determine when your periods begin and end, scientists hypothesized that women would be able to manipulate their cycles with just a nightlight. Subsequent experiments confirmed the validity of this theory as women who experience long or irregular cycles were able to shorten their cycles by an average of 12 days by sleeping with a 100 watt light bulb next to their bed during the last two weeks of their cycle.

16. Your voice changes during your period

Researchers found that women had a lower minimum pitch during the late follicular phase (after menses) as compared to their menstrual phase. Similarly, they had lower voice intensity in the luteal phase (the phase that starts after ovulation and ends with the start of your next period). Interestingly, women who were on the pill did not have these same voice changes as the pill kept their voices more stable (and less feminine) throughout their cycle.

Levels of serotonin (the feel-good hormone) dip during PMs which is why you are more likely to feel low and irritable during this time. Your body uses carbs to make serotonin which is why high carb foods like chocolate can make you feel calmer and happier. However, in some cases, sugar cravings can be linked to low progesterone levels, so make sure that you mention this to your doctor during your next visit.

18. Insomnia during your periods is not normal

It’s not easy to get sleep when you’re suffering from cramps but if you find that you are suffering from insomnia for no good reason just before or during your periods, you should consult your doctor. This is because your lack of sleep might be caused by low progesterone levels – a simple hormone test will help to determine if your progesterone levels are abnormally low.

19. You don’t lose as much blood as you think

Most women think that they lose a lot of blood during their period but you generally lose just about half a cup of blood; many women lose as little as 2 teaspoons! A lot of the fluid that you lose during your period is mucus and not blood. If you feel that you lose more than this, you should talk to your doctor as unusually heavy periods can have a negative impact on your overall health.

20. You spend approximately 10 years of your life menstruating

The average woman spends about 3,500 days menstruating – which amounts to 10 years! Since we get our periods just once a month, we rarely stop to think about how much it all adds up to. The same study also calculated the number of sanitary products a woman will use in her life – a staggering 11,000-15,000 products.

21. PMS can make you more violent

If you feel savage and violent during your period, you’re not alone. Studies show that the hormonal changes women go through during their periods make them more prone to violence. A study of female prison inmates found that they were more likely to commit violent acts just before their periods than directly after menstruation.

22. While menstruating, some women bleed through their ears, nose, eyes

This may sound like a wild and particularly disturbing myth about periods but a rare medical condition called vicarious menstruation can cause some women to experience bleeding from extragenital organs during a normal menstrual cycle. A woman’s uterus is lined with endometrial tissue that sheds each month when she gets her period. In cases of vicarious menstruation, the woman has endometrial tissue in areas apart from her pelvic region. The natural hormonal changes in her body trigger the shedding of endometrial tissue which is why these women bleed from their eyes, ears, nose, mouth and other organs.

Although you may feel enlightened after learning these interesting period facts, it is important to note that you should never indulge in self-diagnosis. Don’t feel awkward about discussing your periods and PMS with your doctor – doctors are trained to deal with just about everything. One of the most important things to keep in mind is that any sudden changes in your periods could be a sign of a more serious problem so don’t ignore it. Fibroids, endometriosis, and PCOS are just a few of the conditions that are linked to heavy periods. Make sure that you also inform your doctor if anyone in your family suffers from any of these conditions as there could be genetic factors at play. If you feel that you have very heavy periods, tell your doctor about it and always discuss birth control with your doc before you go on the pill.