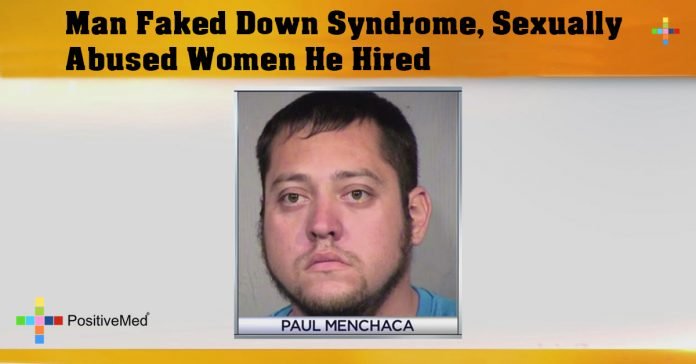 A man from Arizona has been charged with several counts of fraudulent schemes and sex abuse after faking Down syndrome. He had hired female caregivers to change his diapers and bathe him.

According to USA TODAY, Paul Menchaca, 31, was accused by three women but police believe that there could be more victims. Darrell Krueger, a sergeant with the Gilbert, Arizona, police department, said that the women reported that Menchaca would become aroused during diaper changes and baths.

It is alleged that Menchaca hired the women through an online service, where he was posing as his mother, according to azfamily.com reports. He was communicating with the caregivers through texts using a fake name. According to published reports, he would then make arrangements with them to pick him up at a number of locations.

Menchaca has requested assistance from one caregiver for 30 different times, in reference to azfamily.com. The publication says that a good number of those times, the man would insist that his genitals were not properly cleaned.
One of the alleged victims told Phoenix Fox affiliate KSAZ that the man acted like a child in her presence. Another victim said that she had initially believed that Menchaca’s behaviors were tied to his disability.

The unsuspecting caregivers became suspicious, and one visited the man’s home, according to the station report. Kruger said that the family responded that the man had no Down syndrome and was capable to take care of himself.

According to KSAZ, Menchaca told a judge that his family had documents to show he had special needs with a low IQ level and was making arrangements with his dad to seek counseling.

Menchaca has been working with a local school district in a support staff position before resigning on Aug 31. This is in reference to azfamily.com
Police suspect that the alleged scheme was taking place between January and September 2018. His arrest came on Sept. 6.
According to online court records, Menchaca was expected to have a preliminary hearing on Sep. 17.