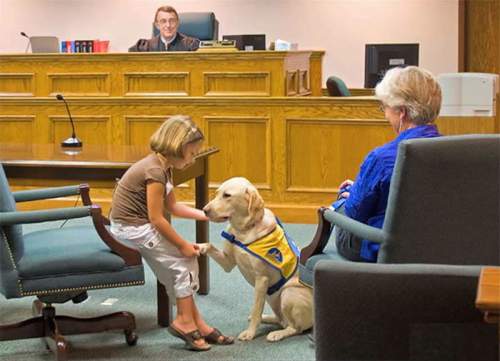 How Courthouse Dogs Are Making A Difference In The Court Room

A young girl who was repeatedly $e*[email protected] abused, a small boy who witnessed his father violently attack his mother, a developmentally delayed adult who was terrorized, and a woman who was violently raped, all have something in common; a paralyzing fear of encountering their perpetrator again. But now they have something else in common as well . . . all of them are being helped by the friendly face of a dog.

Children and adults who have been victims of extremely violent or $e*[email protected] crimes are highly susceptible to levels of fear that make it impossible for them to face their perpetrators in court. In fact, many of them live in fear of ever seeing that person again, let alone confronting them as part of a trial. Nearly 100% of children who have witnessed the murder of a parent and 90% of children who were $e*[email protected] abused develop PTSD, according to a study by Bradley Hospital. Likewise, the Journal of Traumatic Stress reports that 94% of rape victims develop Post Traumatic Stress Disorder. It’s not surprising that when it’s time for a trial, prosecutors struggle to keep these victims from shutting down on the stand. That makes the task of putting these criminals behind bars a difficult one.

Fortunately, there is a group of 87 specially trained dogs in 28 states who are helping to fight for justice for these victims. These dogs are coming to court to provide support to the most vulnerable. The American Bar Association reports that the presence of a dog provides the emotional support and comfort that victims need, resulting in improved witness testimony. With one of these trustworthy animals by their side, victims feel safe to tell their story. And that is the ultimate benefit—not only are vulnerable comforted, but the dogs help uncover the truth and convict the guilty, resulting in a safer community.

Since the 1700’s people have noted the benefits of human-animal bonding on the emotional and mental health of humans. Physicians, psychologists, sociologists, and therapists have all researched the amazing impact of dogs and other friendly animals. These animals can reduce anxiety, lower blood pressure, lower heart rates, heighten mental clarity, and increase speech and memory function—all helpful benefits in a trial. According to the Animal Law Committee, these special dogs are creating a more gracious courtroom environment that enables everyone, from judge to the juror, to do their jobs more effectively.

Courthouse Dogs is a group led by retired prosecutor Ellen O’Neill Stephens and veterinarian Celeste Walsen which strives to bring more of these specially trained dogs into courtrooms and child advocacy centers. Hopefully, a growing number of dogs will be showing up to dig up the truth. How much safer would our world be with victims who weren’t afraid to tell their story because of one of these amazing animals?