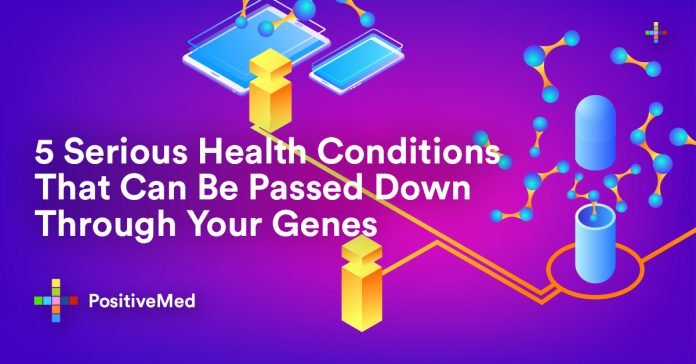 There are hundreds of serious diseases that can be passed down genetically from parent to child. In many cases, the parents do not have the disease itself but have the gene that causes it. When they have a child with another person who has the same mutation, the chances of their child having the actual disease increases greatly. Here are five serious health conditions that can be passed down through your genes:

Sickle cell anemia occurs because of a defect in the blood cells, specifically in the hemoglobin. Instead of being round and smooth, the blood cells are stiff and characteristically sickle-shaped. Because of this, the normal flow of blood throughout the body is interrupted. Symptoms include:

• Anemia because the abnormally shaped red blood cells can’t function like they should
• Episodes of excruciating pain. These are called crises. They can last for hours or even days
• Swollen hands and feet
• Fever
• Susceptibility to infections
• Increased risk of other health issues such as stroke
• Jaundice, or the yellow of the eyes and skin

Most often, symptoms don’t start to appear until after the baby is able to crawl or walk around. When the symptoms arrive they include:

In this inherited disease, the fluids that usually lubricate the organs or help with digestion are thick and sticky. Because of this, they clog organs such as the lungs, the organs in the digestive system and even the sweat glands. The symptoms of cystic fibrosis are different for different patients, but they include:

This condition is the result of mutation on the FMR1 gene that’s found on the X chromosome. More boys are affected than girls, most likely because boys only have one X chromosome while girls have two. Fragile X causes intellectual and learning disabilities that range from mild to severe, and medical experts claim it is a cause of autism. Fragile X patients suffer from shyness and social anxiety and may panic when they are placed in unfamiliar situations. They have larger than normal ears, very soft skin, flat feet, double-jointed fingers and a face that is unusually long and narrow. These features manifest when the child reaches puberty.

As of 2018 these diseases are not preventable. Potential parents can opt for genetic testing to see whether they are carriers of the genetic mutations that cause these diseases. They can also utilize devices such as the FDA approved 23andMe, which costs $79 and can be ordered from amazon.com. Another genetic testing kit available on amazon.com is Vitagene DNA test kit at $57.66.