PositiveMed The Positive Side of Medicine
Home psychology Body Image How Long Will It Take to Remove My Tattoo? 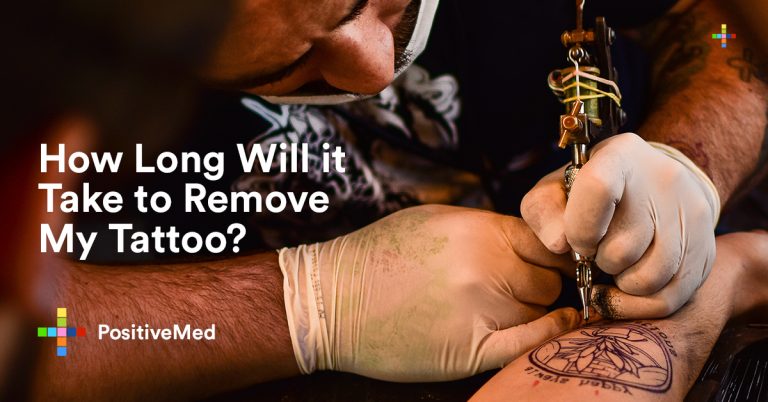 The first thing people want to know about tattoo removal is how long will the process take?  In general, most standard black tattoos will need up to eight treatments before they fade and will require recovery periods of eight to ten weeks between sessions.

When you’re desperate to get rid of your tattoo, waiting eight weeks between sessions may seem like torture, however, that recovery time is vital to the success of the removal process.  The ink particles making up the tattoo are mainly situated on the second layer of your skin.  This primary location stops the tattoo from fading and remains permanent.  Being in the second layer of the skin also enables the tattoo to be large enough to remain there without being absorbed into the bloodstream.  The effectiveness of laser tattoo removal treatment is due to the manner in which it sends a shockwave of light waves, breaking the large ink particles into smaller ones.  Doing so allows your body to easily absorb those particles and then release them.  Understandably, it takes time for the body to perform such an act.

The specifications to determine the number of sessions required for laser tattoo removal was developed by two dermatologists and is known as the Kirby-Desai Scale.   This scale will be used alongside your consultation to give you a more individualized timeframe.

What factors determine how long the process will take?

There are many factors to consider when determining how long it will take to remove your tattoo.  After you’ve had your personalized consultation you’ll have a clearer understanding of how effective this will be for you. Some of the things that play a role in the timeframe of laser tattoo removal are:

Skin tone plays a major role in the overall outcome of the removal process. Because darker skin tones hold more pigment melanin, there’s a greater likelihood of hypopigmentation or discoloration resulting from treatment during sessions.  As this doesn’t occur in paler skin tones, we’re able to use high power settings on the lasers which reduce the number of laser treatments required. A skin patch test should always be performed on darker skin tones to ascertain skin sensitivity before commencing long-term treatment.

Generally, a small tattoo should only require between six to eight laser treatments to completely fade. The density and the amount of ink contained in the tattoo will determine how quickly the ink particles will break down and the rate at which your body can absorb them.  Understandably, very dark ink will take longer to remove than greys and shading because of the lack of density.  Tattoos that are layered on top of older ones (known as layering), must be removed separately and therefore require more sessions.

You may not think it but tattoo colors such as black, red, dark orange and blue are easier to remove than most other colors.  Because the ink used in tattoos are made up of various ingredients, each one reacts differently to the laser light wave. Tattoos containing a light shade of yellow and green for example will require fewer treatments than tattoo using other colors.

The area where your tattoo is located on your body can determine how quickly your body can absorb and detoxify the ink particles during each treatment.  If the tattoo you want to be removed is on your head, neck, torso, it can fade quicker than other areas of your body due to your lymphatic system (responsible for ridding the ink from your body) working more effectively in the upper regions of the body as opposed to the lower areas.

These tattoos which often contain less ink may have been injected unevenly or sit on a different layer of your skin (as opposed to having one done professionally where it is always located on the second layer), therefore they’re often easier to remove and take less time.   An amateur tattoo containing second grade may also break down quicker than professional grade ink.

Related Link: Here’s How Getting A Tattoo Works In Slow Motion

How long will each treatment take?

It is not possible to predict exactly how long each session will take as the session time is determined by the size of the tattoo. However, on average smaller tattoos may take a few minutes with larger ones needing longer sessions of 20-30 minutes each time.

To ensure optimal results, it’s vital to remain healthy and follow the after-care instruments between your treatments.  Once you’ve completed your personal consultation, you will have a clearer idea of the amount time it will take to remove your tattoo.