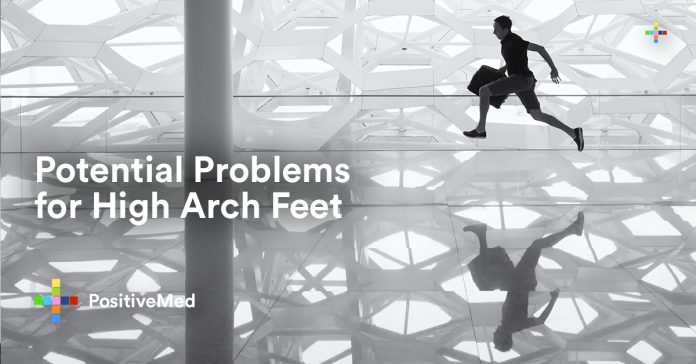 A high-arched foot, also known as cavus foot, affects approximately 20% of the population and can cause painful and discomforting foot problems which actually require treatment. As a condition known as pes cavus, having a high arch

How Can You Tell If You Have a High Arch?

A basic ‘wet test’ is fairly reliable in diagnosing whether you have a high arch or not. If you step from a shallow pan of water onto a piece of heavy paper, you can gauge your arch level by the shape of the two footprints you leave behind. If the heel and ball of the foot appear clearly but only a sliver of a crescent-moon shape connects them, this indicates you have a higher than normal arch.

In a clinical setting, you may meet with a doctor or surgeon and discuss both your family history as well as take part in a physical examination of your foot, ankle, and leg, as well as your gait (the way you walk) and pronation. Medical professions will look out for muscle weakness Imaging tests like x-rays can provide even greater visual insight into your foot structure, as well as

How Does a High Arch Develop?

The structural abnormalities that form a high arch are most often either inherited or result from a neurological disorder like muscular dystrophy, cerebral palsy, spina bifida, or stroke. In the former, a high arch can often be treated with non-invasive aids that help redefine the arch and more evenly distribute weight when standing, walking, and running.

In the latter, a defined medical condition which only worsens over time is typically indicates that a high arch structure in the foot will not be reversible. Symptoms like ‘drop foot’ are characteristic of a neurological disorder and essentially involve the foot and ankle muscles weakening to a point where the foot begins to drag when walking.

When you have a high-arched foot, much of the shock of the impact your foot makes with the ground when walking is absorbed by the heel and ball of the foot. High arches also reflect under pronation, or the lack of a natural inward rolling of the foot when taking a step. Excessive under pronation, also known as supination, is marked instead by an outward rolling of the foot during normal motion – supination can stress and strain key feet and lower leg muscles leading to a host of problems including:

– the thick ligament which connects the heel to the toes, the plantar fascia, acts as a tension support for the arch of the foot. When it becomes irritated and strained, inflammation and tears can occur resulting in mild to severe heel and arch pain commonly referred to as plantar fasciitis.

– rough patches of thick skin on the ball, heel, or side of the foot can build up in response to the supination of a high-arched foot. Though not dangerous, calluses can still feel strange and for people with high arches, the calluses may be excessive and unsightly.

– also known as a stone bruise, metatarsalgia is the term given to the inflammation and pain in the ball of the foot from the constant pounding with the ground. As the vertical forces of walking and standing are unevenly distributed to the heel and ball of the foot in someone with a high arch, the natural cushioning on the ball of the foot starts to wear away and the metatarsal bones that connect the foot to the toe start to feel the impact.

How Can High Arches Be Managed?

The good news is that high arches can often be managed with non-invasive measures like utilizing orthotic aids, bracing the foot or ankle, or modifying your footwear. Orthotic supports for high arch feet aim to fill in the cavity of a tall arch to more readily disperse the shock (and weight) of your foot’s impact on the ground when walking and standing. They can also offer extra cushioning to the heel and forefoot as well as provide stability to the ankle to prevent sprains.

As for footwear, shoes with high tops that stabilize the ankle, and have a little bit of a heel and lots of cushioning can make a big difference in the pain and comfort levels of someone with a high arch. In severe cases, surgical intervention may be taken.