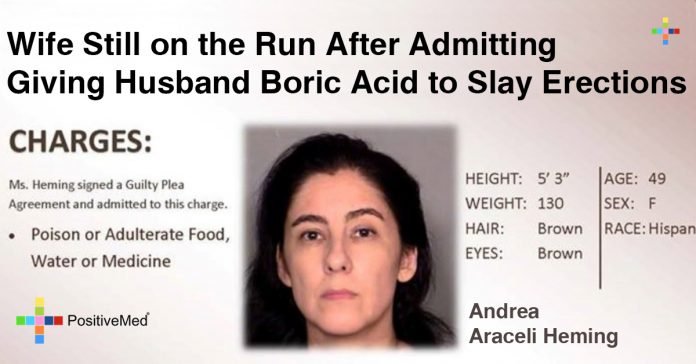 It wasn’t his lucky day after that happened.

Authorities are now running after Andrea Heming after lacing her then-husbands bowl with her lucky charms.

A judge has issued an arrest warrant for the 49-year old woman after she failed to attend her sentencing on a poisoning charge earlier this week.

According to prosecutors, Heming poisoned her husband by lacing boric acid into his cereal, Miracle Whip, and energy drinks at their home in Spring Valley in 2015.

Hemming told the court that her intention was not to kill him but rather wanted to make him impotent. This is because his husband used to have unwanted sex with her when she was asleep at night.

According to police, Andrea said that she wouldn’t use that much to slay her husband but just enough to make him not attain an erecti0n. Andrea also stated that she could not have used that much to kill because she was about to become an American Citizen.

As an insecticide, boric acid is commonly used to kill termites, cockroaches, and scorpions. However, when taken in high doses, boric acid can be lethal to humans.

Ralph Heming reported to police that he had diarrhea each day for up to six months. He also experienced other symptoms including nosebleeds, red face, fever, and lethargy.

According to prosecutor Hetty Wong, authorities could not find evidence to authenticate the sexual claims. Until she was arrested, Andrea Heming had not reported being raped. Initially, she was charged with attempted murder. In December, she pleaded guilty to a single charge of poisoning or contaminating water, food or medicine.

According to a police report, Ralph Heming, who specializes in camera installations, had installed several throughout the couple’s home. Andrea didn’t like the idea of camera installation around their home, particularly in the kitchen, her husband told the police. And that what helped prosecutors in proving the charge against her. Andrea Heming was shown to tamper with her husband’s food and drink for three days in video footages.

The police said that Andrea also reported to pouring boric acid into the energy drink, Miracle Whip, and a box of Kelloggs Corn Pops.

Ralph could not believe that his ex cannot be reached. He thought authorities had a better system of keeping track and holding people responsibly.

Authorities are yet to track Andrea after she declined to attend her sentencing hearing. They believe that she is probably hiding in her native Mexico.