PositiveMed The Positive Side of Medicine
Home health inflammation Ladies! If You Have PAINFUL SEX You Need to Read This! 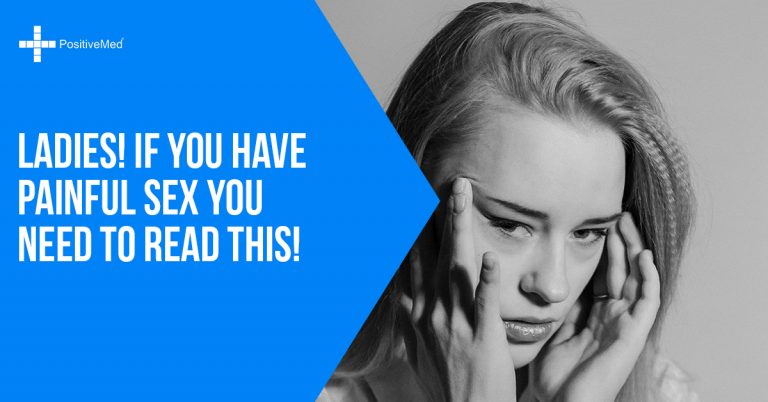 Are you experiencing pain during intercourse? Then you are not alone, many women experience the same for various reasons. You don’t have to get worked up on your situation as there are different causes and associatedremedies. Painful sex can be debilitating causing emotional distress and even translating to sabotage of a relationship. Pain during intercourse is condition which should always be addressed once it arises.

What does it mean?

Pain during sex is a communication by your body that something is not right. Anyone with such a condition should try to find out the cause and address the same. Usually detecting the causative agent on your own is a bit difficult thus one should see a sex counselor for help.

Insufficient lubrication can be a cause for pain during intercourse. The condition can be addressed if the female gets more relaxed. The case can also be resolved by increasing the amount of foreplay or if a sexual lubricant is used.

Other causes are brought about by fear of getting hurt, when vaginal muscles experience involuntary spasm or virginal infections. Vaginal infections among ladies are common and take the form of conditions like yeast infections. In some cases, there is a problem with the cervix and with maximum penetration, pain may be experienced.

Fibroids are one of the conditions related to the uterus and in such a case a lot of pain is involved during intercourse. The uterus can also bring about pain if the tissue which lines it grows outside.

Pain during intercourse might also be brought about if problems exist within the ovaries. This may include cysts.

Ladies might suffer inflammatory disease of the pelvic where the tissues become inflamed during intercourse. The associated pressure can cause pain. The pain becomes intense as the inflammation goes deep into the tissues.

Ectopic pregnancy is another cause of pain during intercourse. This is a condition where the fetus grows outside the uterus.

Note: You should never have intercourse immediately after giving birth or after a surgery as a whole lot of pain is involved. On the other hand injury to your vagina or vulva translates to pain during intercourse.
Other causes of pain include sexually transmitted diseases and onset of menopause.

Addressing pain during intercourse majorly depends on what’s causing the problem. Treating painful sex for some cases does not require any medical intervention. Citing an example, experiencing pain during intercourse after a pregnancy requires abstinence for a minimum period of six weeks after giving birth. Apart from abstaining for the period, there has to be a lot of patience involved and a practice of gentleness.

In other cases, vaginal dryness and absence of lubrication are the causes for the pain. Using water-based lubricants acts as a remedy, other forms of treatment will usually require the doctor for care. Vaginal dryness might be a result of menopause. In such a case get estrogen creams or any other prescription medications from a medical practitioner.

Some cases of pain during intercourse require prescription medication. On the other hand there are sexual pain cases where there is no underlying medical reason. Such incidences can be remedied through sexual therapies.
There might be other causes for pain during intercourse such as past sexual abuse, inner conflicts in relation to intercourse and guilt. For such cases, one can only have a solution by resolving them.

Urgently see or call a doctor when you experience symptoms such as vaginal discharge, irregular periods, bleeding, genital lesions, or the involuntary contractions of the vaginal muscle.