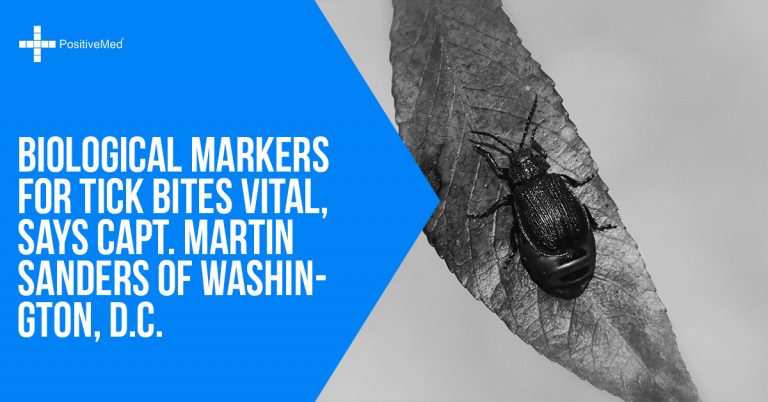 Conclusions drawn from an article co-written by Martin Sanders and published in the American Journal of Epidemiology state that biological markers are vital for the analysis of tick bites. The paper, titled Antibody Levels to Recombinant Tick Calreticulin Increase in Humans after Exposure to Ixodes scapularis (say) and Are Correlated with Tick Engorgement Indices, produces and analyses a study of tick bite related biological markers. When contrasted with self-reporting, biological markers appear to be a much more effective indicator of whether an individual has been bitten by a tick, despite the lack of definitive information within the subject area.

The paper discusses the lack of determined biological markers of arthropod exposure within the vector borne disease field. This shortage of information has made the diagnosis of tick borne diseases (such as Lymes disease) especially reliant on individuals self-reporting bites. This method has its obvious disadvantages: ticks are small, painless and can go completely unnoticed once they latch on to their target. This problem is ever more serious when combined with the harmful nature of tick related diseases. Lymes disease is especially harmful; the patient’s full recovery is often reliant on early detection of the disease, but this can be extremely difficult when symptoms are not dissimilar to those of a common cold or flu and patients often are unaware that they have been bitten by a tick.

Martin Sanders received PhD from the Department of Immunology and Infectious Diseases at the Johns Hopkins University School of Hygiene and Public Health. He went on to have a successful career within the U.S. Army, United States Public Health Service Commissioned Corps, and the Department of Health and Human Services. He has previously been acting director for the Office of Health and Safety within the Centers for Disease Control and Prevention. Sanders received the 2007 Derek Dunn Memorial Senior Scientist Officer of the Year award.

The American Journal of Epidemiology is a peer-reviewed academic journal published by The Johns Hopkins University School of Hygiene and Public Health. The journal aims to publish empirical findings and methodological developments within the field of epidemiology. The journal was first published in 1920. Antibody Levels to Recombinant Tick Calreticulin Increase in Humans after Exposure to Ixodes scapularis (say) and Are Correlated with Tick Engorgement Indices was published in 1999 in number 8 of volume 149 of the journal.

Captain Martin Sanders’ letter to the Emerging and Infections Diseases (EID) journal was published in the first volume of the fourth edition of the journal in 1997. His letter sought to clarify the naming of a species of tick within one of the journal’s previous publications. Martin Sanders noted that the authors had solely used the term Ixodes dammini when referring to the tick, despite there being widespread scientific consensus that Ixodes dammini had been synonymized with Ixodes scapularis. Therefore, the sole use of the previous name of the tick inferred that there were in fact two separate species, when in truth their was agreement within the scientific community that they were of one. Sanders stressed his clarification was important as the use of two separate names could be confusing and therefore be damaging to health-care providers, public health officials, and lay persons who may be seeking information on the subject matter. According to Capt. Martin Sanders, consistency was imperative in such circumstances.

Captain Martin Sanders is currently the Chief Scientist Officer at the U.S. Public Health institute. He has had an illustrious career within the health sciences divisions of the CDC and U.S. Army.

He was one of four members of the steering committee that was responsible for determining the overall direction and scope of CDC’s BMBL’s fifth edition in 2007. He has held the position of  deputy director for the Office of Health and Safety at the Centers for Disease Control and Prevention. He completed a PhD at the Department of Immunology and Infectious Diseases at the Johns Hopkins University School of Hygiene and Public Health. Sanders received the Derek Dunn Memorial Senior Scientist Officer of the Year award in 2007.

The Emerging Infectious Diseases (EID) journal is a monthly publication thats primary purpose is to publish material on emerging and reemerging diseases throughout the world. It is considered one of the top emerging diseases journals in the world; it is currently ranked 4th in the world amongst emerging diseases journals according to the Journal Citations Report. The journal is published by the Centers for Disease Control and Prevention which is a government ogranization that aims to increase public health through prevention of disease, injury, and a host of other health factors. It is headquartered in Atlanta, Georgia and employees over 15,000 staff.

Captain Martin Sanders, currently Chief Scientist Officer for the U.S. Public Healthcare Service, was involved in the steering committee for the fifth edition of the Biological Safety in Microbiological and Biomedical Laboratories. The publication, issued by the CDC (Centers for Disease Control and Prevention), is considered the preeminent consultative document for biosafety and policy in laboratories within the United States. While the publication is primarily advisory, it has been a stalwart of the biosafety community since its inception in 1984.

The BMBL is a publication that outlines a wide array of different issues related to biosafety from biological risk assessment and principles of biosafety, to immunoprophylaxis and agent summary statements. The 5th edition of the BMBL also widened its scope in order to include issues that have only recently presented themselves within the field of biosafety. Decontaminzation, sterilisation, laboratory risk assessment, biological toxins, agent summary statements for agricultural pathogens, and occupational medicine and immunisation are just some examples of additions to the 5th edition of the publication. These additions were made in response to September 11th as well the Anthrax attacks that took place in America; it was pertinent to acknowledge the growing challenges that the biosecurity communities were facing in the wake of heightened bio threats.

Captain Martin Sanders was one of four members of the steering committee that was responsible for determining the overall direction and scope of BMBL’s fifth edition. At the time of its publication Capt. Sanders was deputy director for the Office of Health and Safety at the Centers for Disease Control and Prevention. His position on the committee comes after a long and reputable career in the CDC and the U.S. Army. He holds a PhD from the Department of Immunology and Infectious Diseases at the Johns Hopkins University School of Hygiene and Public Health. In addition, he was the recipient of the Derek Dunn Memorial Senior Scientist Officer of the Year award in 2007.

The Biological Safety in Microbiological and Biomedical Laboratories (BMBL) 5th edition is now readily available and free of charge on the Centers for Disease Control and Prevention website. If you are interested in finding out more about the publication, as well as the host of other services and advice that the CDC provides to the biosafety community, please visit www.cdc.gov.