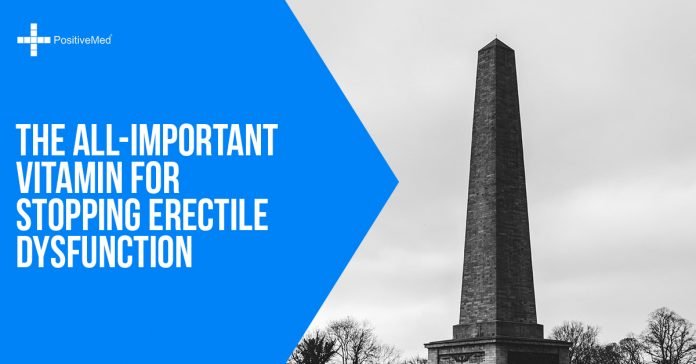 According to a study recently conducted in Italy, low levels of vitamin D could increase the risk of erectile dysfunction (ED). Lacking adequate amounts of the sunshine vitamin might impact your bedroom game in a negative manner. An estimated 30 million men suffer from erectile dysfunction in America today.

Erectile dysfunction could be due to psychogenic or organic factors. However, natural factors are known to cause an overwhelming majority of the cases. The most common organic factor is atherosclerosis of the penile artery. Atherosclerosis is the hardening of artery walls due to the accumulation of plaque that contains fatty material, cholesterol, and cellular debris. This process occurs systemically throughout the body and is not limited to the arteries that supply the heart or male genitals. Patients with diseased coronary arteries have a higher risk of developing erectile dysfunction than those without.

After testing 143 men with varying erectile dysfunction degrees, researchers found that about half were deficient in vitamin D. In addition, only one in five of the men tested had adequate amounts of this nutrient. Men suffering from severe ED had a vitamin D level that was approximately 24% lower than those with mild forms of the condition. According to Alessandra Barassi, M.D., the study’s author, insufficient levels of vitamin D can spur the production of superoxide ions. These free radicals deplete nitric oxide, a molecule that helps to ensure your blood vessels function properly.

RELATED ARTICLE: Men! What Does Your Erection Say About Your Heart Health?

Due to this depletion, getting an erection becomes a lot harder. Nitric oxide causes the relaxation of blood vessels, increasing blood flow and leading to an erection under normal circumstances. Without sufficient amounts of nitric acid, your blood vessels might not relax enough to enable an erection.

READ ASLO:  How to Make Coffee That Boosts Bedroom Performance

This connection between vitamin D and men’s erectile capabilities might explain why you tend to feel friskier during summer than in the winter. As a matter of fact, the short winter days and more time spent indoors mean you are getting less vitamin D. This nutrient also activates the genes responsible for releasing dopamine and serotonin, lack of which is linked to depression. As such, you also get less dopamine and serotonin.

Regardless of the benefits offered by adequate vitamin D levels, an estimated 77% of American men don’t get enough of it. We should get vitamin D by regularly exposing our entire body to the sun for the greater part of the day. This practice would lead to the formation of endogenous vitamin D under our skin. However, we spend too much time indoors, wear clothes, and apply sunscreen whenever we visit the beach. As a result, we only get a fraction of the vitamin D we require.

Fortunately, you can also get the required amount of vitamin D by taking a supplement. While UV-B rays need to react with your skin’s cholesterol to become vitamin D-3, supplements already have this vitamin. You, therefore, do not have to be a nudist to get sufficient amounts of vitamin D.