Historically speaking, American women have enjoyed full citizenship rights for only a brief period of time, only in the last forty years or so. Globally, the relative equality offered in the United States is an aberration. In many cultures, a woman who attempts to assert her full rights as a human being to risk abuse, jail, or even death. How has institutionalized discrimination lessened in recent years? Here are 7 things women weren’t allowed to do for many decades. 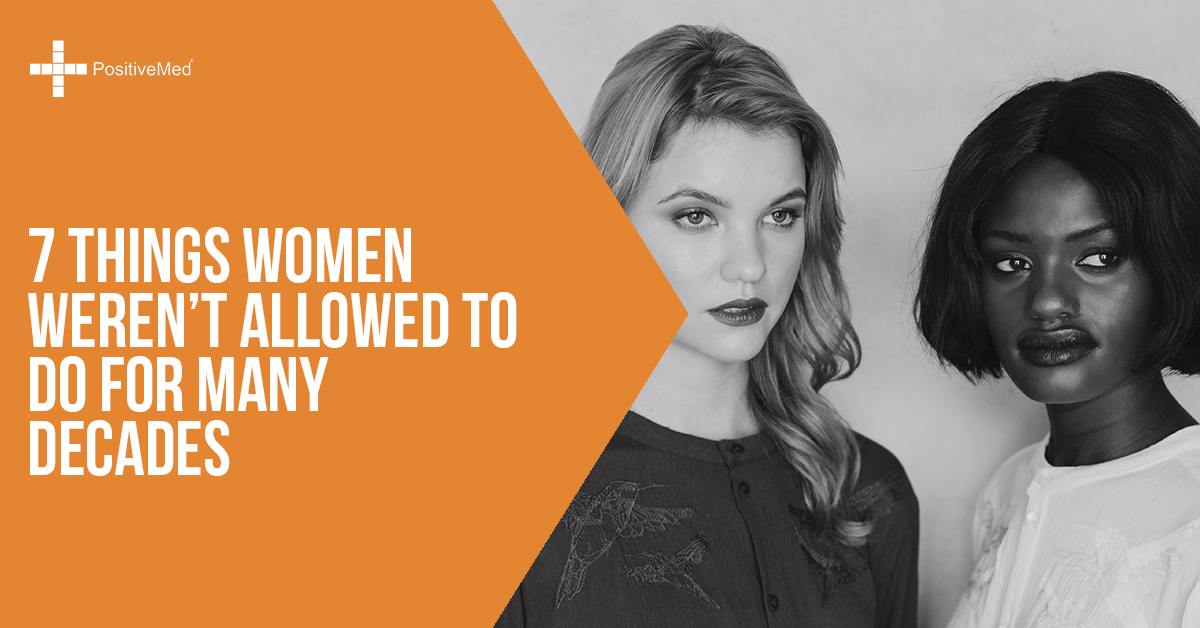 With Child, Get Fired
Hard as it may be to believe now, prior to 1978 a woman could be fired outright just for pending motherhood. Congress, in its infinite wisdom, decided to update the Civil Rights Act of 1964 to make it illegal for a woman to be dismissed from work on this basis. This is not to say scurrilous bosses didn’t (don’t) still find ways to accomplish the same end, but at least it doesn’t carry the nation’s official blessing.

Workplace Harassment
Hard as it may be to believe, not a single woman was harassed in the workplace prior to 1980. Complaints were seen as proof a woman shouldn’t be working in the first place. In 1977, a court finally recognized that harassment was indeed a thing – no duh! In 1980, it was officially defined by the Equal Opportunity Employment Commission.

The Delicate Gender
This bit of discrimination against women is so ridiculous as to almost be unbelievable. Almost. According to anthropologist Genevieve Bell, the increasing use of the steam engine in the early 19th century, and especially its use in trains, created a near panic. What was the problem? The thinking of the day was that a woman’s body was not strong enough for travel at a whopping 50 mph; she might faint, or worse. The solution? No women on trains.

RELATED ARTICLE: 9 Signs You May Be Smarter Than the Average Person

Her Own Credit
It was well into the 20th century before a single woman was likely to be approved for a credit card on her own. Before that, well, it was obvious that a woman couldn’t be trusted with the responsibility of handling credit. Cards were only for men and married women who had their husband co-sign the application. The Equal Credit Opportunity Act of 1974 prohibited discrimination on the basis of, among other things, gender.

Reach for the Stars
While NASA never specifically banned women from becoming astronauts, it was a well-known fact that they only made selections from one pool of applicants – military test pilots. Since women were not accepted into pilot training by the military, there were zero female astronauts. It wasn’t until 1979 that women were allowed to enter astronaut training, and 1983 before the first female astronaut, Sally Ride, was finally able to slip the surly bonds of earth in the space shuttle.

Abortion
Regardless of your stance on the abortion issue, it was 1973, in the (in)famous Roe vs. Wade Supreme Court decision, that a woman finally could choose to legally end a pregnancy. Until then, nada. Furthermore, there were no extenuating circumstances. Not even in cases of threat to the mother’s health.

Suffrage
Modern women think nothing of the idea of walking into a voting booth and having their say about the country’s governance. This reality is a far cry from 1920, the year the 19th Amendment took effect. During America’s formative years, a woman’s right to vote was a slipshod affair. Depending upon local rules, she might or might not be allowed the privilege. After decades of fighting, the women’s suffrage movement finally resulted in the prevention of discrimination based on gender.

The preceding list of things women have been prevented from doing at various times in the past is shocking but not even an exhaustive account. A few other standouts would include no right to serve in the military or run in the Boston Marathon. While today’s society hasn’t achieved full equality by any means, there’s no denying that great strides have been made.