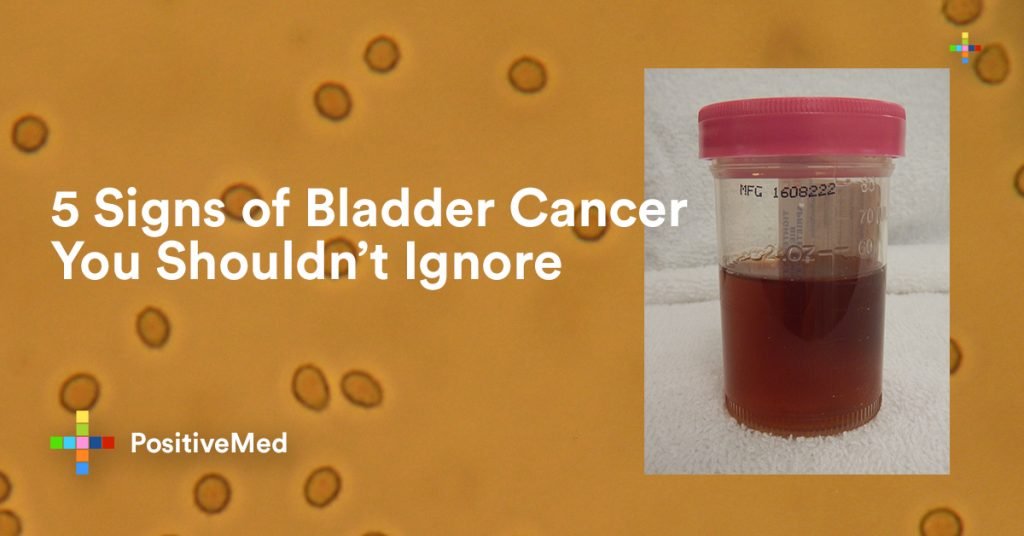 Making up about 5 percent of all the new cancers diagnosed in the United States, bladder cancer isn’t the most common cancer. As of 2016, 58,950 men were diagnosed with it, as opposed to 18,010 women. Yet, more women die from it than die from cervical cancer, and women are not even as susceptible to bladder cancer as men. Because of this, it’s important that people know the early signs of bladder cancer, which can mimic more benign disorders. Here are five signs to watch out for:

1. Blood in the Urine

The person may see spots of blood in the urine or the blood can only be seen under a microscope. Urine that’s the color of cola or dark tea is also suspicious.

RELATED ARTICLE:  Blood in Your Bodily Fluids – Warning Sign You Should NEVER Ignore

Blood in the urine can also be the sign of a urinary tract infection or UTI. Urine that’s smoky or dark can be the harmless side effect of a drug, the result of the consumption of certain dark foods such as blackberries or beets or a sign of a liver disease. Only the doctor knows for sure.

As with bloody or dark colored urine, burning on urination can also be a sign of something other than bladder cancer. It is a common sign of a urinary tract infection.

Another sign of bladder cancer is the frequent urge to urinate but not producing much urine. The person may have to run to the bathroom many more times during the day than normal or have to get up in the middle of the night to urinate. This can also be a sign of an enlarged prostate, prostate cancer, diabetes or the effect of a drug.

The patient should consult with their doctor if their urinary tract infections are persistent and not responding to drugs.

READ ALSO:  Lower Your Chances Of Ever Getting Cancer

5. Pain in the Pelvic Area

This can also be a sign of many other disorders. Another sign of bladder cancer is a pain in the back as well as the pelvic area.

When all of these signs and symptoms appear together, it is a cause for concern and a reason to visit the doctor.

The bad news about bladder cancer is that it tends to recur, and patients need to have regular check-ups with their doctor to see whether or not it has come back.

Though bladder cancer is not aggressive cancer, it is still a good idea to visit a doctor if troubling symptoms such as the ones discussed appear.

PrevPrevious9 Things That Harm Facial Skin. Are You Using Them?
NextFive Things You Should Know If You’re Sitting Down All DayNext