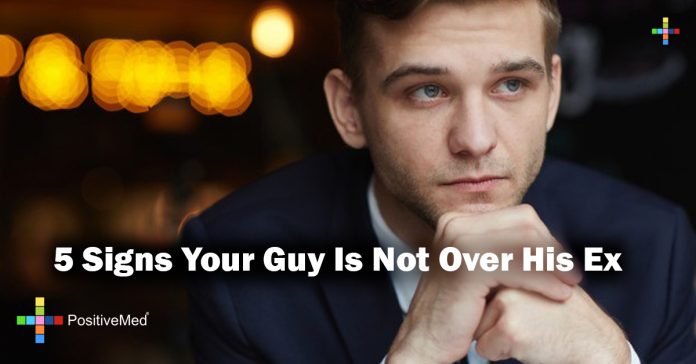 5 Signs Your Guy Is Not Over His Ex

You probably started that new relationship all excited about the potential it holds. However, most people do not come without histories. Your guy likely has at least one ex in his past. This does not have to be a problem, as long as he is completely over her. There are a few telltale signs that your guy is not over his ex; you should keep these in mind and rethink your relationship if you observe your guy exhibiting any of these signs.

• He says nasty things about her on a regular basis. Although you might think that it is a good thing he dislikes his ex, if he is trashing her all the time, he is still focused on her and likely not over her.

• He is constantly doing things for her. If he is often going over to do handywork at her apartment or pet sitting for her, it is likely that he is hoping their breakup is just a temporary situation.

• He texts or calls her often. Remaining friends with her is one thing, but if he is in constant communication with her, this spells out danger for your new relationship. He is constantly talking to someone he was once in a relationship with, and it is a slippery slope between “staying friends” and getting back together.

• She is the first person he calls with good or bad news. If they were once in a happy relationship, she likely was the first person he would tell whenever something big happened in his life. However, they are no longer together. Now, whenever he has big news, you should be the one he wants to tell right away. If he is thinking of her before you, this is a red flag.

• He is obviously upset that she is in a new relationship. If he was truly over her, he would not care if she starts dating someone new. The fact that he is upset that she has a new guy in her life shows he is likely jealous of that guy, which is a bad sign for you.