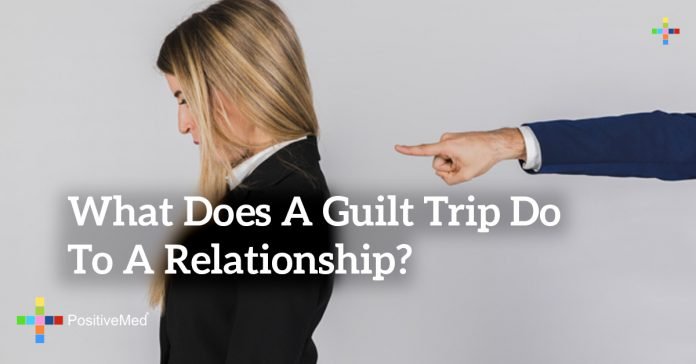 What Does a Guilt Trip Do to a Relationship?

[nextpage title=”…”]
Guilt is an incredibly effective motivator. Making someone feel bad often results in them not only apologizing but reassuring you. However, the cost of guilt trips can be very high as far as the strength of your relationship is concerned. If you use guilt trip to get what you want, you are sacrificing respect, closeness and possibly the long-term prospects of your relationship.

If you have children, you are also giving them a toxic relationship pattern to copy. Here is a look at the damage that the manipulative weapon of guilt can do to a relationship, and how you can prevent it if you are the target:

What is Guilt? What is Shame?
Guilt and shame are two very uncomfortable feelings that are often confused with one another. Guilt is a bad feeling because you have done something wrong. Shame feels similar, but you do not need to have done anything wrong to be shameful, and it focuses more on feeling like a bad person than it does feeling like you’ve hurt someone else. These feelings are often paired together.

Either one of these is very effectively stirred up by the manipulative tactic of a guilt trip. Guilt trips are designed to make someone feel both guilt and shame, as they typically try and make someone feel worse for what they have done than they necessarily deserve.

Why are Guilt Trips so Effective?
Guilt trips are effective on two kinds of people. Those with low self-esteem, who already see themselves as bad people, and those who are incredibly empathetic to others feelings. The first tends to feel shame while the second feels guilt. In both cases, guilt trips manipulate a situation. They magnify a situation and its implications and make the other person at fault.

This can be as simple as making a comment about how you have suffered from the other person’s actions to shaming them in front of others. Public shaming and/or guilting also adds an element of social humiliation to the mixture, which makes it worse for the other person, but more effective for you if that person tends to be socially motivated.

What Does a Guilt Trip do to a Relationship?
Guilt trips are built on manipulation, dishonesty and disrespect. Using them to get your way instead of communicating clearly and honestly and being willing to acknowledge your part in a problem opens the door to distrust, resentment and lack of communication.

It makes it less likely that the other person will communicate to you about small problems because they will believe that you will complain but not be able to help to solve them. They will not come to you for emotional support, as you are a source, instead, of emotional turmoil when the slightest thing goes wrong. This means that you are not partners, and it is a common form of drifting apart that can tear a relationship in two separate directions.

READ ALSO: 6 Times You Shouldn’t Feel Guilty in a Relationship

How do you Avoid a Guilt Trip if you are the Victim?
You cannot make someone give up guilt trips, but you can make them less effective. The biggest way to do this is to communicate openly about the behavior, not to respond in the way that the other person wants, and to reward alternate behaviors like speaking clearly about what they do want. Be open with them about the fact that you are not comfortable confiding in them when they behave that way, and that they need to find a more constructive way to air their grievances.

This will likely be met with resistance and guilt tripping at first, and you can point out that this is the behavior you are talking about, and suggest alternate things they can try to get the result they want. This method must be disciplined and will take some time before it becomes permanent. This is especially true if the two of you have had a guilt trip based relationship for a long time, and if the person is a chronic guilt tripper toward others as well.
[/nextpage]