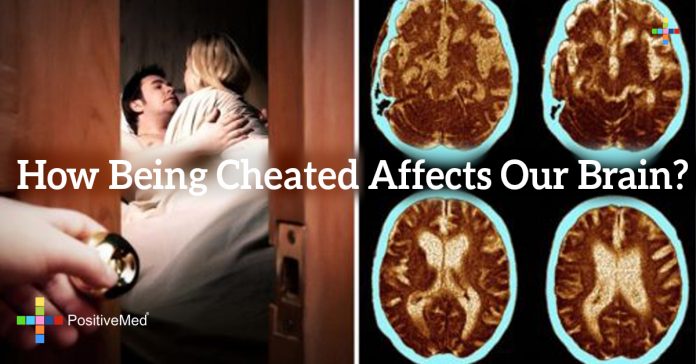 Being cheated on impacts more than feelings and has both short and long-term effects on our brains. It affects almost every aspect of our lives, from the type of pain we experience initially to the manner in which we evaluate our future mates.

Although understanding the neurological effect might not aid recovery, it makes it clear that cheating bears severe consequences. These consequences are proof that grief and the consequent questioning should not be downplayed or dismissed.

Heartbreaks can induce physical pain, meaning betrayals and breakups are both physically and emotionally painful. They activate the sections of the brain that react to physical discomfort. A study conducted by the University of Michigan shows both physical and emotional pains are processed the same by the brain.

The dorsal posterior insula and secondary somatosensory cortex lit up after volunteers were exposed to both types of pain. It hurts a lot to be cheated on because the brain processes emotional pain same as physical pain. For monogamous individuals, infidelity equals a rejection of the core value as partners, which is why it hurts.

Gender mediates the physical reactions to being cheated on in every relationship. A study conducted in 2009 aimed to prove men felt guilt for emotional infidelity and women for romantic infidelity. Unfortunately, the results were the exact opposite of this hypothesis. Can the results change if you are the victim and not the perpetrator?

Another study conducted in 2015 on 64,000 Americans aged between 18 and 65 shows the same results as the previous one. Interestingly, non-monogamous individuals demonstrate no gender differences. Jealousy still mattered but was mostly mediated through communication, a necessary part of all non-monogamous situations.

When cheated on, our brain reacts as if we are trying to quit an addiction cold turkey. To the brain, love is just as addictive as cocaine. As Berkeley explains, the experience of love follows a similar brain pathway as the rush of any addictive substance. Seriously in love individuals indicate strong reactions in the caudate nucleus, which releases feel-good chemicals, motivating behavior.

Without the feel-good chemicals, the body reacts in a manner almost similar to when one quits nicotine. Experiencing that rush with someone else might trigger an addictive substance-seeking mode, causing disregard for everything else searching for the next “fix.” As it turns out, affairs are just as addictive as the first dose of love.

RELATED ARTICLE: 8 Ways to Get Over a Cheating Partner

We could develop obsessions and ruminations

Rumination is the tendency to think about the causes, consequences, and situational factors of negative emotional experiences, repetitively. As it turns out, women are more likely to react to being cheated on with rumination, which is a psychological practice. Rumination causes endless revisiting of the feeling in your mind after an emotional situation such as cheating.

Our reaction to the removal or betrayal of love and its addictive nature are part of the reasons we tend to ruminate. Individuals conflicted about their loved partners after a breakup exhibit activity in the sections of the brain related to addiction and dopamine. This is according to the results of an Albert Einstein College of Medicine study.

The result shows an obsessive and repeated revisit of the same thoughts. Obsessing over the feeling of betrayal after your partner cheats on you is not unusual at all. Unfortunately, a study in 2012 revealed that a lot of rumination following infidelity reduces the chances of salvaging a relationship. A 2000 study shows that women are more likely to feel responsible for a relationship’s emotional tone compared to men.

Women also feel more responsible for the negative events that occur in relationships compared to men. In other words, women are culturally conditioned to believe that in the least, infidelity is their fault.

Infidelity in a relationship and the consequent betrayal constitute few bright sides. According to a recent study, it enables us to learn about how to make better choices. The study, conducted on 5,705 women from 96 different countries, was on the consequences of breaking up because their partner cheated and chose the other woman. Within a year, most of the women who were in such a situation had evolved their choice of mates.

Selection of a mate is a fundamental factor in life as a living organism. To human beings, it covers everything, be it the assessment of financial habits or notation of behaviors and trends. As it turns out, the hard lessons learned by living through infidelity improve the criteria of mate selection in women. They are better equipped to detect signs indicating the possibility of undesirable traits in future partners.

Researchers call this newly acquired awareness “low mate value.” Additionally, researchers found out that the women surveyed thought they had refined this new ability. As a result, although getting cheated on is quite painful and miserable, it is also educational.

Although being cheated on might hurt and make you miserable, it actually makes you a better person. Fighting through the pain guarantees you emerge as a refined and upgraded version of your old self. Not fighting through might cause bigger problems down the road resulting from obsessions and ruminations. Let go and start a new life.