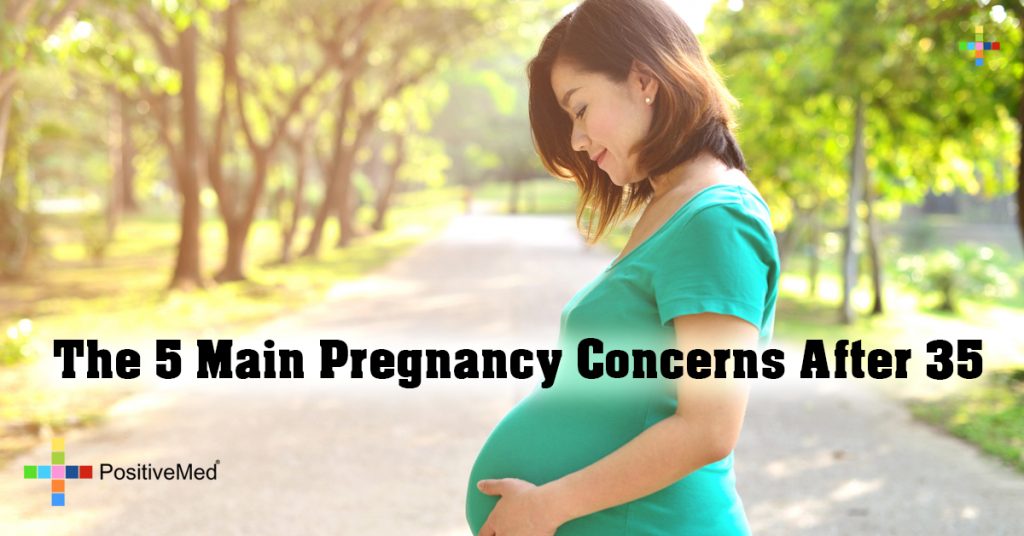 The age that women have their first child has steadily increased over the last twenty years. Women who are having their first child and are between the ages of 40 and 44 has doubled since 1990. For women between the ages of 35 and 39, the rate has increased sixfold since the 1970’s. This has also changed how doctors and hospitals have had to care for these pregnancies and newborns. There can be several problems encountered with a pregnancy of women over age 35 and this article will discuss the 5 main pregnancy concerns after 35.

As women age, they will see a decrease in their fertility which starts to decline rapidly after they turn 35. Certain complications can also become more common after you turn 35 in attempting to get pregnant such as:
• Fewer healthy eggs ovulated
• Altered ovulation from hormone changes
• Fewer eggs left
• Less frequency of lovemaking
• Men’s sperm count decreases with age
• Other medical conditions that interfere with conception

Many women worry if getting pregnant after they turn 35 is safe. Women are having more pregnancies that are safe over 35 that in the past. However, infertility and complications with pregnancy are still higher than they are for younger women. Once you understand the risks associated with pregnancy over 35 then you help increase your chances of having a healthy pregnancy. Here are 5 pregnancy concerns you should understand before getting pregnant.

Birth Defects
As a mother ages, their risk for having a child with a birth defect increases. There is an abnormal separation of the egg called nondisjunction that leads to unequal chromosomes at the end of the division. As a mother’s age increase when she actually gives birth, so does the risk of the baby having Down syndrome which is one in thirty for a women who is 45 or over.

A Multiple Pregnancy
Women over 35 are also likely to see a multiple pregnancy as the change of having twins increases with a mother’s age. Also, the increased use of in vitro fertilization has increased the number of multiples that have been seen in the last twenty years.

Miscarriage
Advanced maternal age also has a higher risk of miscarriage which is about 25% of pregnancies for women 40 years old. This is due to an increased occurrence of chromosomal abnormalities which contributes to the miscarriages. Stillbirth is also more common in women over 35 and they are also more likely to have a baby with a low birth weight (less than 5.5 pounds).

Health Problems
Several health problems can arise for moms over 35 during the pregnancy and also long term. High blood pressure can develop during pregnancy with women over 35 at an increased risk for it. This needs to be monitored carefully and if it becomes serious, it might be necessary to deliver your baby early.

Gestational diabetes is also more likely to develop in women over 35. If you receive a diabetes diagnosis, it’s important to make sure you watch your blood sugar and diet throughout your pregnancy. If it’s not treated correctly, your baby can grow much larger than average which can cause other risks during delivery.

Caesarean Section
Since women over 35 have several more medical issues to deal with, it also raises the possibility that they will have to have a caesarean section to deliver their baby. The increased likelihood of a baby with low birth weight or that you need to have a premature birth because of a health issue. Other complications can include conditions like placenta previa where the placenta blocks the cervix or preeclampsia which is caused by high blood pressure.

There are lots of women today who are over 35 and want to get pregnant. If you understand the 5 main pregnancy concerns after 35, you can take special care to make sure you take care of yourself during your pregnancy. Watching your diet and your blood pressure will help give your baby her best start.