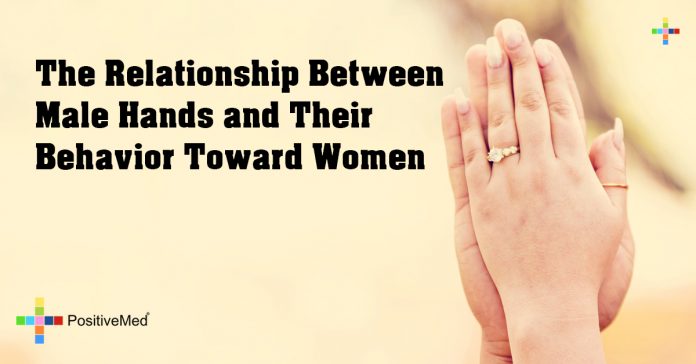 The Relationship Between Male Hands and Their Behavior Toward Women

Contrary to popular belief, it looks like there may actually be a way to judge a book its cover, as long as the book is a man and the cover is his hands. New research from McGill University concluded that men with a particular trait were significantly more likely to be kind to women. Apparently, the closer a man’s index and ring finger are to the same size, the more likely they are to have a naturally pleasant predisposition toward the females.

The reason for this, as per their scientific paper, is that the ratio between these two fingers in a male is indicative of the level of developmental hormones, namely testosterone, present in the womb during gestation. A higher presence of testosterone will lead to a bigger difference between the sizes of the index and ring finger. Lower levels of the hormone translate to fingers of more equivalent length, and it is believed that those lower levels of testosterone also promote less aggression in the adult male, and therefore a gentler predisposition toward women.

The findings were shared publicly through a press release issued by McGill University, which not only discussed the connection between male finger length and behavior, but how they performed the study that led them to their conclusions. Essentially, 155 participants were monitored for 20 days, over the course of which they were required to keep track of every social interaction they had. Those interactions were then classified and organized by researchers, who started to look for patterns in the data. They noticed that males with similar finger lengths had over 30 percent fewer negative interactions and over 30 percent more positive interactions.

The researchers particularly noticed that these males smiled more, laughed, compromised, and complimented their counterpart with much more regularity than those with large finger length disparities. One researcher involved in the study, psychology professor Debbie Moskowitz, noted that this could point to a relationship between birth rates and men with similar finger lengths. She explained that the behaviors associated with similar finger lengths included those that would form a strong relationship, like listening, empathy, and the desire to commit.

RELATED ARTICLE: Ladies! Here Is What His Teeth Say About His Genital

What’s interesting is that this trait is something that not only sheds light on how a baby develops in the womb, but it also explains social behavior in the fully formed adult years after birth. Other factors that can be predicted by examining hand traits are fertility, immune response, happiness, and assertiveness. The reason why such a wide variety of traits can be predicted through the hands is that they finish their development at a crucial point in the gestation cycle, and because they are so complex, even the slightest variation in environmental stimuli can change how the limbs develop. By studying the subtle interactions between stimulus and biology, we can determine how those stimuli relate to and affect the physical structure of a human.

Similar studies show that those men with large disparities between their index and ring fingers are actually more susceptible to infidelity. The reason goes back to the level of testosterone once again, since higher levels of testosterone are associated with $exual promiscuity and a desire to seek new partners. Of course, you shouldn’t assume your significant other is going to cheat, or already has, just because his fingers are wildly different lengths. The trait is only a risk factor, and can’t be used as proof of infidelity or any of the other associated behaviors.

It has been shown multiple times that more testosterone exposure in the womb leads to a larger difference in the sizes of the ring and index finger. A shorter index finger reflects more exposure to testosterone, which then leads to a higher level of testosterone in the adult male once he has physically matured. More research is required to form a defined connection between the two traits, but preliminary evidence is exceptionally strong.