If You Feel THESE Symptoms Your Intestines Might Be Full of Parasites! Take THIS Mixture To Kill Intestinal Parasites Immediately 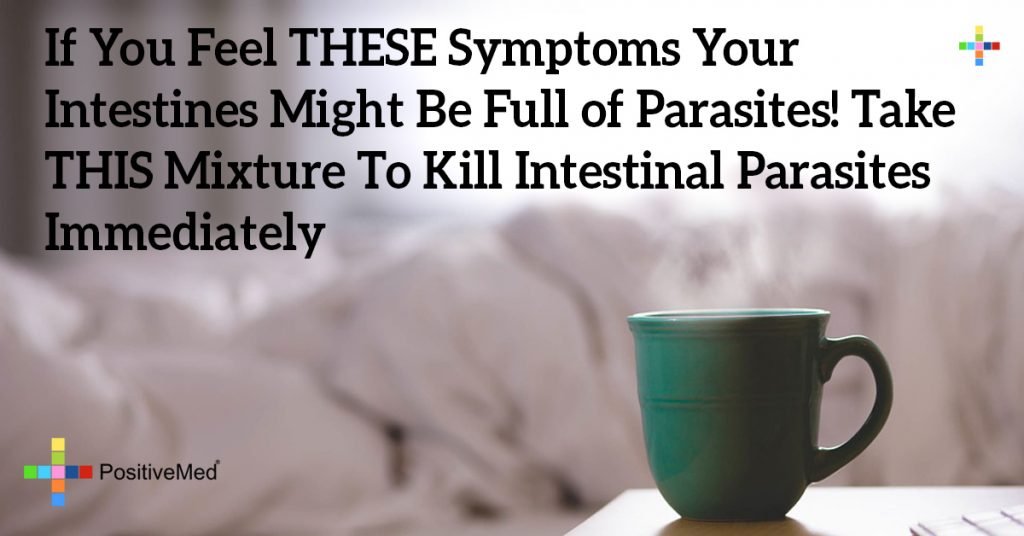 If You Feel THESE Symptoms Your Intestines Might Be Full of Parasites! Take THIS Mixture To Kill Intestinal Parasites Immediately

Many people think parasites only exist in exotic, tropical locales, but sadly, this is not actually true. Anyone from anywhere in the world can be affected by parasites, which are ingested alongside food or drinks. Having a parasite inside of your body can cause many health issues, so it is essential to kill intestinal parasites as soon as possible.

Parasites are organisms that can live inside of a person’s body, stealing their nutrients when the person eats. There are many different types of parasites, which can exist in many different parts of the body. The most common form of parasites are various worms that inhabit the intestines. Intestinal parasites cause pain, insomnia, fatigue, constant hunger, irregular bowel movements, and skin irritations.

The main danger with parasites is that they steal nutrients and then release toxins and waste into a person’s bloodstream, causing a variety of problems. Other forms of parasites may reside in other organs and muscle tissues, but these are quite rare. Parasites are often very hard to get rid of, since they will lay eggs within the human body that hatch after the first generation of parasites is dead.

How Do You Know if You have a Parasite?

Although there are many reasons that you could have any of the following symptoms, there is a likelihood that you could have parasites or worms if you have experienced a significant change of bowel movements. This could be if you are constipated or have diarrhea, or if you are just going at a different frequency than you usually do.

If you’re experiencing rashes, unexplained redness or blotchiness on your skin, this could also be another major symptom that you have a parasite in you.

If you have parasites or worms in your intestine, you may experience an abnormal itching in your abdomen. This occurs because the parasites release toxic materials in your body that triggers an allergic reaction by your immune system.

Similar to this itchiness, another immune reaction is a rash on your skin. This is also caused by the toxins that the parasites leak into your system. This causes a hypersensitive reaction in the form of a skin rash.

The rash will often show up as itchy red bumps on your skin.

RELATED ARTICLE: See How These Internal Parasites Are Eating You Alive

Preparation:
Stir the cloves, wormwood, and black walnut extract into 16 ounces of water. Add honey if it tastes too bitter to stomach.

Why Does This Tea Work?

This tea is highly effective because it contains ingredients that have been shown to fight against parasites. Wormwood actually gets its name because it was used as a way of getting rid of intestinal worms during medieval times. Wormwood kills parasites because it has high levels of sesquiterpene lactones. These compounds damage a parasite’s protective membranes, leaving it unable to live within the body. Black walnut also kills intestinal parasites because it contains juglone, a compound that prevents parasites from metabolizing nutrients. In addition to killing parasites, black walnut also stimulates the colon, so that bowel movements flush the worms out of the body. Typically, parasitic eggs are not affected by wormwood and black walnut. However, cloves contain a type of oil that actually dissolves the casing around a parasite’s eggs, so that the eggs can be killed as well.

When you first begin taking the cleanse, you might feel tired and nauseous as your body works to expel the parasites. As the black walnut begins to take effect, you may have to go to the restroom several times. However, once the tea begins to work, you will start to feel better. It is recommended that you take the tea once a day for a week, and then take a week off to let your body rest. If necessary, you can take the tea again for a week, in order to ensure that all parasites are gone.

With this tea, you can get rid of any pesky parasites that are lingering within your body.It is made out of natural herbs, so there are not many unpleasant side effects as long as you do not take multiple doses at once. However, a few parasites, especially the ones that live outside of the gastrointestinal tract, are strong enough to resist this tea, so you should visit a doctor if you still have symptoms of a parasitic infection.