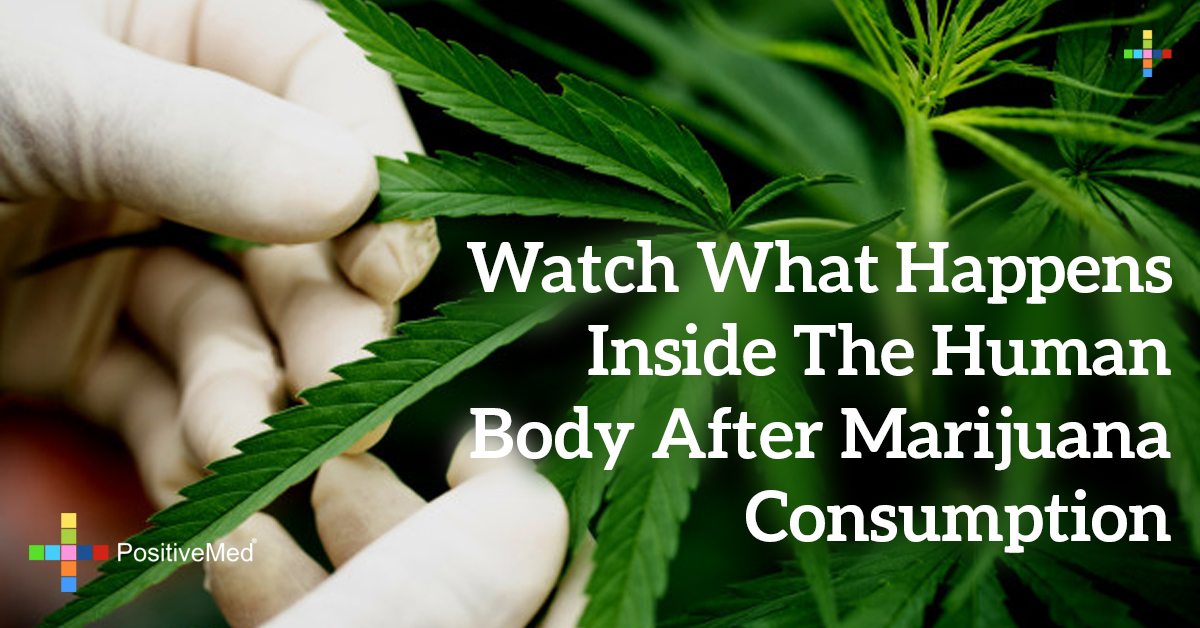 Watch What Happens Inside the Human Body After Marijuana Consumption

When you smoke marijuana, the mind altering chemical THC (tetrahydrocannabinol) and other chemicals travel through the bloodstream to your brain. Your lungs absorb the inhaled smoke, which travels through the alveoli and into the blood. THC reaches the brain just seconds after it’s inhaled, creating the powerful feeling users experience as a “high.” While the high varies for each person, here are a few of the most common side effects for marijuana users and why these physical and psychological changes occur.

Euphoria
When THC enters the brain, it produces a flood of dopamine, the chemical that is responsible for joy and other pleasurable feelings. Dopamine release is the biological reward for doing things that are designed to propagate the species, such as eating and making love. Marijuana overactivates the brain’s dopamine production, which leads to an intense feeling of contentment and well-being.

Appetite Changes
The cannabinoids in marijuana interfere with the appetite suppressing hormones in the brain, which tell you when your body is full. At the same time, your increased endorphins, or pleasure hormones, are enticing you to eat more, for a one two punch that is colloquially known as “the munchies.”

Memory Loss
THC also acts on the hippocampus, the part of the brain that forms and processes memories. Changes to the hippocampus can cause short term memory loss in marijuana users, as well as permanent cognitive impairment for those who use the drug while the brain is still developing. It’s not all negative, though; recent research shows that the drug may prevent the development of Alzheimer’s disease. According to a 2006 study published in the journal Molecular Pharmaceutics, marijuana blocks the enzyme in the brain that causes the formation of the brain lesions associated with Alzheimer’.

RELATED ARTICLE: This is How Smoking Marijuana Affects Your Lungs

Clumsiness
Marijuana also affects the cerebellum and basal ganglia, the areas of the brain that regulate balance, posture, coordination, and reaction time. This is responsible for the feeling of clumsiness and slow movement experienced when high.

Red Eyes
Marijuana relaxes the blood vessels, a process known as vasodilation. That means that the tiny capillaries in your eyes are affected by increased blood flow, causing the red appearance and puffy lids associated with marijuana use.

Irritable Bowel Disease Relief
Marijuana causes changes in the intestines that reduce permeability and prevent the transfer of bacteria into the gut. For that reason, the drug is often effective in controlling symptoms like diarrhea and constipation in those who have chronic digestive conditions such as irritable bowel syndrome or Crohn’s disease.

RELATED ARTICLE: THIS MAN HEALED 5.000 PEOPLE FROM CANCER: RECIPE THAT KILLS ALL TYPES OF TUMOR IN 90 DAYS

Cancer Treatment
The chemicals in marijuana may help prevent the spread of certain types of cancers. In a 2007 study, researchers at California Pacific Medical Center in San Francisco found that cannabinoids block a gene called Id-1 that helps cancer spread throughout the body.

Increased Heart Rate
Smoking marijuana almost immediately increases your heart rate by between 20 and 50 beats per minute, an effect that can last even after the high has faded. This rapid heartbeat can be dangerous for people with heart disease, increasing the risk for heart attack.

Decreased Eye Pressure
Marijuana decreases ocular pressure, so it may be effective in easing the symptoms of glaucoma. This eye disease increases the pressure in your eyes, causing vision loss and eventually leading to blindness if untreated.