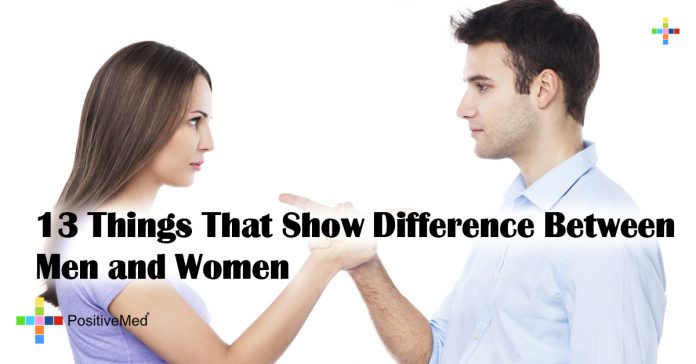 13 Things That Show Difference Between Men and Women

While there is absolutely no difference between men in women in terms of intelligence, strength, or value, there are a lot of differences in the way that we do things. Here are 13 things men, and women do completely differently.

Number 2: Flirt
Men and Women tend to flirt differently in part, because might have something to do with our differences in motivation when we flirt.

RELATED ARTICLE: Differences Between Males and Females and Causes of Infidelity

Most guys are very precision shoppers. They get in, get out, and go home. They are less likely to price check or shop around, and when asked many guys will say that they would pay more for less hassle every time.
For most girls, shopping is a social, and recreational activity that is mean to be savored.

Men and women get dressed, and ready for their day very differently. This is partly due to certain social expectations placed on men and women to look, and dress a certain way.
Most men tend to get up, shower, put on deodorant, comb their hair, brush their teeth, and maybe shave if the mood strikes them.
Women do everything that men do, plus hair, make up, and outfit coordination.

Number 7: Show Sadness
Men tend to either show sadness with silence, or anger. Women are more likely to show sadness as true sadness with tears.
Unfortunately, in our society we teach boys not to cry which leads to bottled emotion and depression especially in teenage boys.

Number 8: Break Up
Men tend to want to break up quietly, and apologetically. Women tend to be more likely to want to argue, cry, and fight about it.

Number 9: Process Problems
Women tend to want to talk about things to process them. While men tend to be more likely to want time, and space to think things through and process them alone.

Number 10: Find New Places
Women are more likely to use navigation devices, or ask for directions than men. Men will look something up once and hope they can find it.

Women tend to form emotional bonds with people to become friends in a system of shared feelings. Men form friendships through shared experiences, and activities.

Number 13: Fist Fight
When things go to blows, men tend to get angry and want to punch each other in the face until someone breaks it up.
Women fight by actually trying to kill each other. Hair gets pulled, faces get clawed, people get bit.

The major differences between men and women are often driven by emotion. Men have just as many emotions as women but our society teaches men and women to express them differently.
[/nextpage]