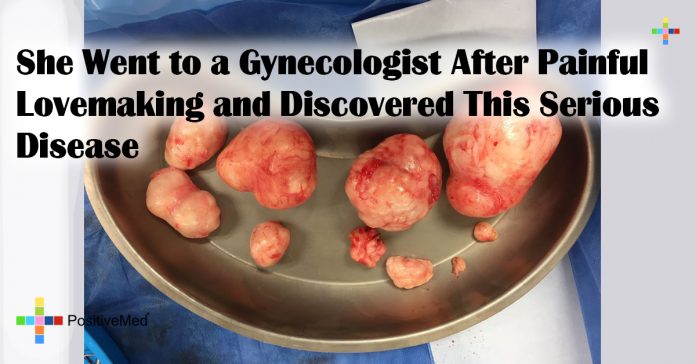 Uterine fibroids are growths in the uterus that often occur during the childbearing years. While fibroids are benign, which means they are not cancerous, they sometimes cause uncomfortable symptoms. However, up to 75 percent of women experience uterine fibroids at some point during their lifetimes, and are often unaware that the growths are present. According to the U.S. Department of Health and Human Services Office of Women’s Health, 20 to 80 percent of women develop fibroids before the age of 50.

Symptoms of Uterine Fibroids
While the majority of fibroids are not symptomatic, some women with these growths experience heavy menstrual bleeding that may last longer than seven days, pelvic pain or pressure, frequent urination, difficulty emptying the bladder, constipation, and backache or leg pain. Occasionally, a fibroid may cause acute pain. Women who have fibroids during pregnancy are six times more likely to need a Cesarean section, and are at higher risk for breech birth, failure of labor to progress, placental abruption, and preterm delivery. Your health care provider can recommend steps to minimize these risks.

Types of Uterine Fibroids
There are three primary types of uterine fibroids. Submucosal fibroids develop on the inner lining of the uterus, and are the type that most often causes menstrual symptoms. These fibroids can also interfere with fertilization, causing infertility. Subserosal fibroids project outside of the uterus, which often leads to urinary symptoms. Intramural fibroids develop within the uterine wall and are also associated withe menstrual symptoms.

Risk Factors for Uterine Fibroids
Uterine fibroids are more common among women whose mother or sister also had fibroids, African American women, those who began menstruating relatively early, women with a diet high in red meat and low in fruits and vegetables. While experts don’t know exactly what leads to the growth of fibroids, this condition is linked to genetic changes, hormone changes, and growth factors within the body.

RELATED ARTICLE: 10 Cautionary Signs You May have Uterine Fibroids

How Fibroids Are Diagnosed
In many cases, fibroids cause no symptoms. However, you should see your doctor if you are experiencing long, heavy, or painful periods; spotting or bleeding between periods; pelvic pain; painful !ntercourse; difficulty emptying the bladder; or a distended abdomen. Fibroids that distort the shape of the uterus can be detected during a routine pelvic exam. If your doctor suspects the presence of fibroids, he or she will do an ultrasound to map the size and location of the growths. In some cases, a complete blood count will be done to rule out other causes of unusual bleeding.

Treatment for Uterine Fibroids
There are a range of treatments for uterine fibroids, so your doctor can help determine the best options for you. In cases where symptoms are mild, a watchful waiting approach is often prudent. When symptoms are severe, hormonal medications such as gonadotropin-releasing hormone, a progestin releasing IUD, or oral contraceptives can help regulate the menstrual cycle. If fibroids are causing infertility, they may need to be removed. Surgical options include MRI-guided focused ultrasound surgery as well as other minimally invasive options like uterine artery embolization, laparoscopic surgery, and endometrial ablation.

Uterine Fibroid Prevention
While there’s no definite way to prevent fibroids from developing, women who are overweight are two to three times more likely to have this condition than women at a healthy weight. You can reduce your risk for fibroids by losing weight if you are overweight, eating plenty of green vegetables, and limiting consumption of red meat and ham.
[/nextpage]