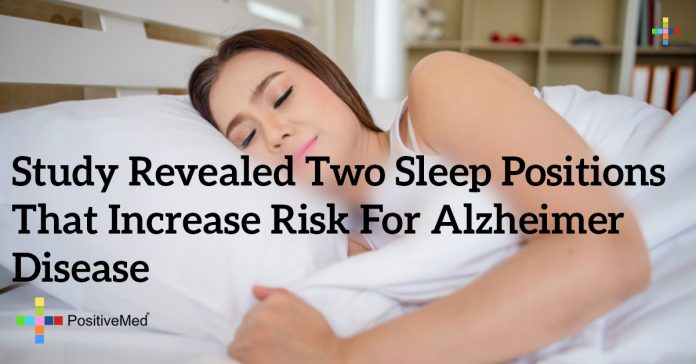 Alzheimer’s disease is a degenerative condition that affects millions of people in the United States. This brain disorder causes a gradual mental decline, increased forgetfulness, personality changes, delusions, and a general decline of quality of life, so it is not surprising that many people wish to avoid contracting the condition.

Though new treatments are being developed for Alzheimer’s disease, research that focuses on methods of preventing this brain condition from happening in the first place are just as important. According to a research study that was just published in the Journal of Neuroscience, a surprising habit may be linked to an increased Alzheimer’s risk.

This new study is important because it examined how sleep positions can affect the functionality of the glymphatic system. The researchers gave animal subjects a contrast dye that would show up on an MRI imaging test, and then performed MRI tests while the animal subjects were sleeping. The contrast dye traveled through the glymphatic system as the subjects slept, so the researchers could see how efficiently it was moving. The study revealed that the lateral positions, which are the animal equivalent of sleeping on one’s side, were significantly more effective at clearing brain waste than positions on the back or stomach. The brain waste that was removed by the glymphatic pathway included the beta amyloid peptides that cause Alzheimer’s disease. The researchers theorized that sleeping on the side is so common among animals because it is the healthiest position, so it may cause damage to health when humans choose unnatural sleeping positions.

Though this research was only done on animals, not humans, it still has profound consequences. The researchers hope to do more research on human subjects to further understand the link between sleeping positions and Alzheimer’s disease. Many doctors have already suggested that sleeping on your side is the best position for your spine, so it is probably wise to switch your sleeping positions if you are accustomed to sleeping on your back or front. In order to get a restful night’s sleep, it is important to get a good side-sleeping pillow, which should be roughly five to six inches wide. A proper pillow to help you sleep on your side will keep your neck straight as you sleep, so your glymphatic system can function properly and your neck muscles do not become strained.