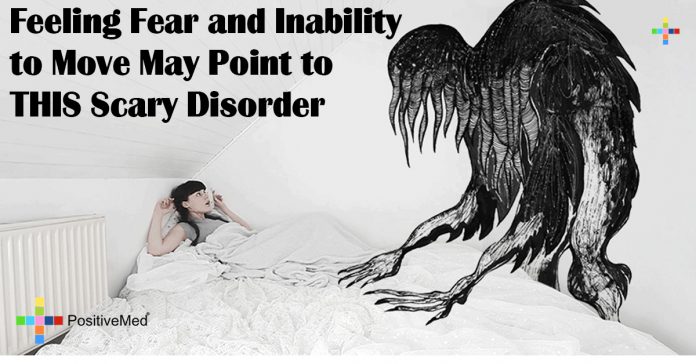 During a regular night of sleep, your brain will typically move through different cycles of sleep, ranging from a very light state of unconsciousness to very deep REM sleep. Though for most people this is a very simple and automatic, others struggle to move through the stages properly and may experience a condition known as Sleep Paralysis. Sleep Paralysis is described as being awake and conscious, but with a complete inability to move your body. The condition may come with a sense of dread and even a feeling of suffocating, though it is not inherently dangerous and is completely harmless when experienced.

Still Being Awake
The most constant and simple of the symptoms of Sleep Paralysis is a feeling of still being awake, and often even feeling alert. Despite your body feeling as though it has fallen asleep, you may feel as though your brain is wide awake and most definitely not in a dream.

Inability to Move, or “Paralysis”
Another symptom from which the name of the disorder is derived is an inability to move, or feeling as though you are paralyzed. This is caused by the muscles in your body relaxing and recharging as they would during normal sleep, though your brain is still awake to perceive the paralysis.

Fear and Unease
Because of your inability to move during Sleep Paralysis, your midbrain will immediately assume that you are in danger or vulnerable to attack by predators. Though your bedroom obviously provides no such danger, your brain makes this assumption and activates an emergency response inside of your body, inducing intense feelings of fear and anxiety much higher than the levels experienced during a regular nightmare. Though this feelings can be extremely intense, it is important to remember that there is no true danger present when experiencing Sleep Paralysis.

RELATED ARTICLE: The Most Common Sleep Disorders and Treatments for Them

Lying on Back
Sleep Paralysis is often experienced by those who opt to sleep on their backs, as in this position you are much more vulnerable to soft palate obstruction of your airways. This position can also heavily exacerbate the symptoms of Sleep Paralysis by allowing gravity to exert more force onto your lungs.

Possible “Out of Body” Experiences
Because of the disconnection between continued brain function and relaxed muscles, researchers at the University of Waterloo say you may feel as though you are floating or even outside of your own body when experiencing Sleep Paralysis.

Sensory Hallucinations
In addition to the possible visual hallucinations accompanied with Sleep Paralysis, you may experience other hallucinations created by your brain in a state of panic. These hallucinations most often include inhuman voices and small touches or currents across the upper or lower body.

Sensing an Unusual Presence
Probably the most startling and common symptoms associated with Sleep Paralysis is the feeling or visualizing of another presence somewhere else in the room with you. This is most widely believed to be caused by the “hyper-vigilant” state of the brain during the emergency response and is almost always described as being horribly terrifying though not at all dangerous.

Though Sleep Paralysis is often a very hard condition to deal with, it can be treated easily and in ways that are completely natural. Therapy in many forms can be very effective in treating Sleep Paralysis and other disorders associated with it, and oftentimes the solution can be as simple as adjusting sleep habits to a normal six to eight hour schedule. These solutions are simple, natural, healthy, and can improve many aspects of your life aside from the disorder itself. Despite the fact that the disorder can cause intense feelings of fear and wreak havoc upon your mental health, it is incredibly important to remember that the disorder puts you in no immediate danger and that help is just a phone call away.