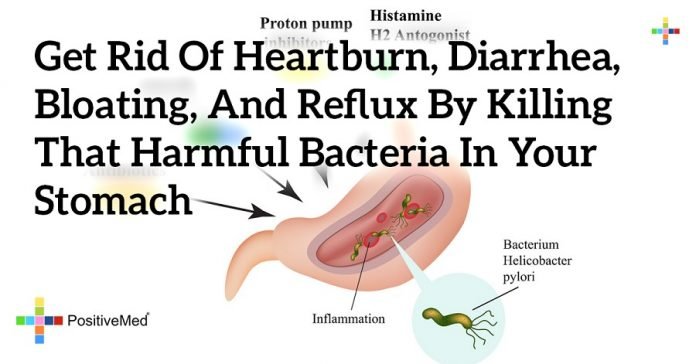 Get Rid of Heartburn, Diarrhea, Bloating, and Reflux by Killing That Harmful Bacteria in Your Stomach
+ How to Know if Helicobacter Pylori is Destroying Your Stomach

The bacteria Helicobacter Pylori (H. Pylori) was identified in 1982 as the cause of stomach ulcers. Able to live in the harsh acidic zone of your stomach, the bacteria attacks the stomach lining and can cause inflammation. The inflammation leads to episodes of gastritis symptoms including bloating, abdominal pain, nausea, vomiting, heartburn, and loss of appetite. While some people remain asymptomatic, others are affected by chronic long-term gastritis. Sores, or ulcers, in the stomach lining and the small intestine may develop over time. The ulcers are painful and cause abdominal pain and discomfort. A serious medical condition arises when the ulcers become large and deep enough to cause internal bleeding. The most severe manifestation of an H. Pylori infection is stomach cancer.

Helicobacter Pylori is a bacteria. It is most common in areas that lack clean water and safe sewage systems. It is found worldwide and the estimate is half of the world’s population harbors the bacteria. Like other germs, it can be spread by personal contact with an infected person’s saliva or bodily fluids. Eating utensils, food, and contaminated water can transfer the bacteria. Improper sanitation is a prime culprit in the spread of Helicobacter Pylori, and fecal contamination of water sources is a serious contributor to the number of cases of infection.

Prevention is centered on cleanliness and sanitation. The same precautions taken against the spread of other germs should be used. Proper washing of hands before handling food or eating is a key safeguard. Everyone should take the simple precaution of washing their hands after using the bathroom. Avoid food that is served when you have doubts as to the cleanliness of the server. Avoid questionable water such as open containers and possibly infected streams or ground water. Undercooked food can pose a danger as well.

So why do some people infected with Helicobacter Pylori experience the debilitating effects of inflammation and others have no symptoms whatsoever? Diet affects the overall health of the body, but it can also combat specific germs. H. Pylori is a “bad” bacteria, but there are good germs inside the stomach as well. Probiotics are a class of “good” bacteria that can balance the effects of the damaging germs. Lactobacillus is found naturally in fermented foods. Yogurt is a good source, but it must contain live cultures that have not been destroyed by heat and pasteurization during manufacturing. Kefir contains beneficial yeasts as well and when made from goat’s milk can be especially beneficial in restoring digestive health. Korean kimchi, sauerkraut, and other pickled vegetables are eaten in many countries to promote stomach health. Natural supplements of probiotics are also widely available.

RELATED ARTICLE: How to Fix Your Gut Bacteria and Start Losing Weight

Herbal and food remedies can often be successfully and safely used to manage an H. Pylori infection. Many of them are known for other health benefits and have been used for generations for natural healing. Green tea has proven antibiotic characteristics that slow down the growth of the H. Pylori bacteria. It is healing, and a boost to the immune system as well. Garlic intake appears to be associated with a lower risk of stomach cancer, but the effect on Helicobacter Pylori specifically has not been confirmed. Red wine, with high levels of polyphenols, fights the bacteria. Broccoli provides a triple punch with antiviral, antibiotic, and has long been touted as a weapon against cancer cell formation. Licorice and honey show promising results as alternatives to pharmaceutical medications.

Helicobacter Pylori is a health problem, and it is prevalent. Many of us are already infected without knowing it, and have no way of determining if, or when, symptoms might appear. Yet we can take the steps to prevent the spread of it by striving for cleanliness in our daily lives. Washing hands, caring for water and food supplies, and general regard for healthy habits can prevent the infection of ourselves and others. The natural opponents of H. Pylori, such as yougurt and broccoli, can contribute to our well-being. In fighting Helicobacter Pylori, we can fight other health concerns at the same time. Enjoy an extra helping of broccoli, a spoonful of Manuka honey, or a cup of green tea, and do your digestive system a favor.

The World Journal of Gastroenterology provides further information on the research behind alternative natural treatments for Helicobacter Pylori. Check this article for more on probiotics.