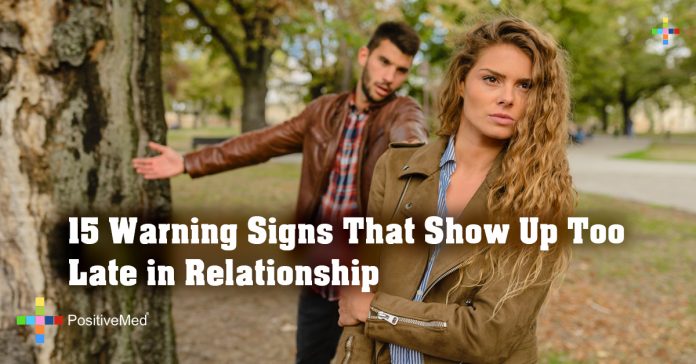 15 Warning Signs That Show Up Too Late in Relationship

We’re all familiar with the typical dating red flags. People give themselves way early on and after a few hard lessons, we’re able to quickly tell who’s worth our time and who needs their number blocked ASAP. Unfortunately, some people are very good at disguising who they truly are, and we may find ourselves in what feels like a happy, committed relationship, though we can’t shake the suspicion that something’s just not quite right.

There are telltale signs that will appear later in a relationship that should make you question whether or not this is really the guy for you, usually starting to appear around month four of a relationship. Although it may be harder to say goodbye when you’ve started to fall in love, ending things now can spare you a world of pain in the future. Check out these 15 signs he’s not the one if you’ve been on the fence lately.

1. He Has an Excuse for Everything
Maybe they sound like great reasons. He was helping his friend move. He went away to visit his parents. He worked overtime and just wants to relax. Even if his excuses check out, that doesn’t mean it’s okay for him to constantly put off responsibilities. If you’re living together and he never cleans or contributes to the household care, citing fatigue or distractions, then it’s more than likely his disregard will transfer to other areas of his life as well, i.e. your relationship. What happens when he’s “too tired” to go on a date? If you confront him about it, he most likely responds with annoyance, anger or guilt trips you. This type of guy is skilled at getting away with things and making you feel like the bad guy. It’s not your job to pick up his slack, so cut him loose now while you’re still able to leave relatively unscatched.

2. He Tries to Change Your Values
Whether it’s your religious convictions, long-term goals or views on family, if he tries to alter your moral compass and standpoints on the “big picture” issues, he’s not the one. These men are selfish and only care about satisfying their own needs, molding you into the woman they want because they’re too insensitive and lazy to show you the respect you deserve. This type of man doesn’t like compromise, so even if he seems sweet as sugar while hinting you should try and see things his way, he’s just as toxic and needs to go.

3. He’s Rude
He’ll say things that sting and when you get mad either laugh them off, insisting it was all a joke, or be callous and say he’s not apologizing for being honest. Don’t let a boyfriend convince you that honesty is mean. Sure, the truth hurts from time to time, but someone who loves you will always go out of their way to deliver it in a manner that is gentle and supportive.

4. He’s Jealous of Your Friends

If you go out and he’s constantly checking up on you, there’s a big problem that needs to be nipped in the bud before it turns into something are worse. A man who can’t trust you with your friends – even if they are male – is a man who won’t trust you in other areas of your relationship. He will become manipulative, controlling and possessive overtime, usually trying to guilt trip you in the beginning before becoming more comfortable in the relationship and moving into full on tantrums. Jealous men are insecure, but there’s no insta-fix you can apply and make him better. Don’t waste your breath trying to build up his confidence. Save the kind words and compassion for a man who will truly appreciate it.

RELATED ARTICLE: 10 Words That Means Something Totally Different When Your In A Long-Term Relationship

5. He Has Anger Issues
Does he spiral into fits of explosive road rage or lose his temper over the smallest things? Is he someone who just “can’t let things go”? If so, leave now. Men with anger management problems need to work through their issues alone. Staying will only put you right in the line of crossfire.

6. He Lies About His Past
Whether it’s small or not, lying about who he has been is a clear indicator of who he is today. Someone who wants to be in a relationship doesn’t like. Love is about showing someone who you are – regrets, fears and all – and being accepted anyway. If he’s lied about one thing, there has – and will be – many others. Spare yourself the hassle of having to play detective and kick him to the curb.

7. He Never Comes Through on Promises

And he’s always “so sorry” about it. Something just came up, he really wanted to see you but he had to take care of something, he swears he’ll make it up to you. Yeah, right. Don’t listen to a man who says one thing and does another. As the saying goes, “Fool me once, shame on you. Fool me twice, shame on me.”

8. He Tries to Bribe You

He was super sweet and attentive at the beginning of the relationship, but nowadays it feels like you have to do things in order to earn his affection. Maybe it’s moving in together or getting married. Perhaps it’s even just having him fully commit as your boyfriend. Whatever it is, he uses it to keep you working for him. You think that if you just do this one thing, he’ll suddenly be Prince Charming. Wrong. You’ll always be working for his attention, and nothing you do will ever be enough for him, so say goodbye and go find someone who is happy to shower you with affection.

9. He Snoops Through Your Phone

He’ll ask to see it from time to time, ask who you’ve been talking to, lean over while you’re texting to see what’s going on. This type of guy doesn’t respect or trust you, so there is no reason to invest your energy in a relationship that is patched together by your commitment and his insecurity.

10. He Meets Other Women

Now, this is not to say a man in a relationship can’t be friends with other women. If he meets them at college or work and makes no means to hide them from you and vice versa, there’s no problem. But if he frequently adds women on social media or gets their numbers while he’s out and insists they’re “just friends” who you don’t need to worry about, forget about it.

11. He Wants to Fix You
A personal trainer or gym rat who says he can “train” you. A man who says that he can help you “improve” yourself or your career. This isn’t someone who is encouraging you to reach your full potential out of love; it’s just a jerk who is too self-centered and inconsiderate to appreciate a great woman when he sees one. These men usually feel a lack of something inside of themselves, so to fix it they will assume the role of a savior and try to make you into someone they can feel proud of. You’re a person, not a trophy, so don’t allow yourself to be treated as such.

Does he avoid issues or stating how he feels at all costs? This isn’t keeping the peace; this is letting emotions fester beneath the surface, a place where they are only bound to reemerge later in a much uglier form. Don’t take the silence as taking the higher road. He’s just too much of a coward to confront issues head on, and this will show through in other ways too.

RELATED ARTICLE: 10 Things Every Man Should Do To Improve His Relationship

It should go without saying, but if you find out a man was with other women before you two were official, you shouldn’t think twice about cutting him loose. He may stress that you two “weren’t official” at the time, but if you’d been going out for over a month or two and he made it seem very obvious that you were the only woman for him then, he’s not really sorry. Just sorry he got caught.

Whether it’s to your mom or your friends, you tell people how great he is and how wonderful things are going, even when he’s actually been out of a job for weeks and crashing on your couch. A real man won’t want you to cover his slack. He’ll get out there and make things happen because seeing you proud of him makes him proud of himself.

15. You Never Feel First in His Life
If you have the sinking feeling that you’re never his first choice, you’re probably right. A man who is committed to you won’t play cat and mouse. You’ll never have to chase him down and wait around for the phone to ring or a date to be confirmed. DOn’t sell yourself short. Hold out for a man who makes an effort to be with and makes you feel like you’re special, because in his eyes, you truly are.